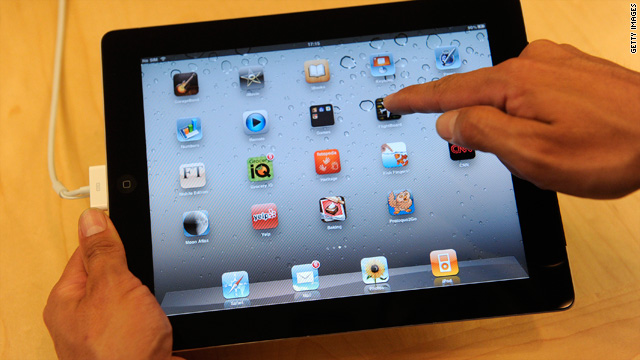 The pilot program allows senior citizens and voters with disabilities to use the sleek Apple interface to access a touch-screen ballot, adjust text size and color if necessary, and select their candidate by typing or by filling in â€śthe bubbles with a pen,â€ť State Elections Director Steve Trout told CNN on Tuesday.

â€śIn government, itâ€™s all about trying to do more with less,â€ť Trout said.

Tuesdayâ€™s vote was a special primary to replace former U.S. Rep. David Wu, who stepped down in August amid a sex scandal.

â€śWe thought it was a good, smaller-scale election to test something like this,â€ť Trout said.

And though itâ€™s way cool, voting via iPad could also be a psychological boon for senior citizens, according to Jerry Cohen, a spokesman for the Oregon AARP.

â€śOregon has a much higher percentage of people 65 and older that use computers, so yes, I think thereâ€™s a very keen interest and a growing interest in technology from seniors in this state,â€ť Cohen said.

â€śFor our disabled voters that want to vote independently and have always wanted to do so, this is the outreach program to help them,â€ť said Pam Benham, elections supervisor for Columbia County, where the pilot program was in use. Along with the iPad, a portable printer is used to turn the ballot into a hard copy that can be mailed, she said.

â€śWe plan to be out at the senior centers in the short term. But as we get it up and going, we should be able to go back to the voter's home,â€ť Benham said. â€śItâ€™s going to take some coordination, and weâ€™ll have to have the staff to go out and do that, but thatâ€™s the goal. It probably wonâ€™t happen until after January, though,â€ť she said.

At the beginning of the year, the state will hold a general election. "We plan to utilize some of what we learn and actually put it to use in then,â€ť Trout said.

Tens of thousands of nurses and nearly 12,000 ambulance workers went on strike Monday over pay and working conditioâ€twitter.com/i/web/status/1â€¦9F
cnni

Tens of thousands of nurses and nearly 12,000 ambulance workers went on strike Monday over pay and working conditioâ€twitter.com/i/web/status/1â€¦9F
cnni