Alex Murdaugh, the South Carolina lawyer whose wife and son were killed in June, turns himself in on charges relateātwitter.com/i/web/status/1ā¦h0

A Colorado state probe launched in response to the death of Elijah McClain found Aurora police had a pattern of praātwitter.com/i/web/status/1ā¦Vi

President Biden plans to announce the US and UK are helping Australia acquire nuclear submarines in a new pushbackātwitter.com/i/web/status/1ā¦hT

Olympians McKayla Maroney and Simone Biles rip the FBI and Justice Department in Senate hearing on the botched inveātwitter.com/i/web/status/1ā¦I9

Authorities have charged a man in the shooting of South Carolina lawyer Alex Murdaugh in what they allege was a conātwitter.com/i/web/status/1ā¦wL 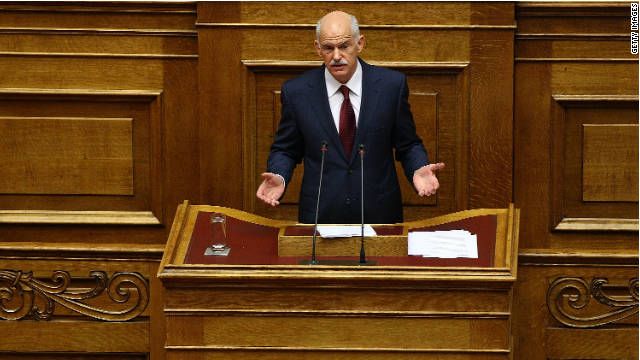 Greek Prime Minister George Papandreou said in a televised address Wednesday that a government of national unity would do whatever was necessary to bring Greece out of crisis.

Greece wants the international community to see that it knows how to be united in the face of difficulty, he said.

Papandreou is expected to resign shortly, and reportedly was headed to the presidential mansion to tender his resignation to President Karolos Papoulias.

In a phone call earlier Wednesday, Papandreou told French leaderĀ Nicolas Sarkozy that the new government would have support from the majority and the opposition, the Elysee Palace said in a statement.

The latest updates come a day after the prime minister said he was optimistic about the formation of a new government amid thorny discussions.

Papandreou and the main opposition leader, Antonis Samaras, have been locked in talks on who might lead the new government. Rumored contenders include Lucas Papademos, a former vice president of the European Central Bank and ex-governor of the Bank of Greece, currently a visiting economics professor at Harvard University.

The political turmoil in Greece has shaken international markets, as investors fear a new bailout deal negotiated with European leaders late last month - which has stringent austerity measures attached - may not be implemented.

Christine Lagarde, managing director of the International Monetary Fund, warned Wednesday of the potential for a "lost decade" if the world's nations do not join forces against the "dark clouds" gathering on the horizon.