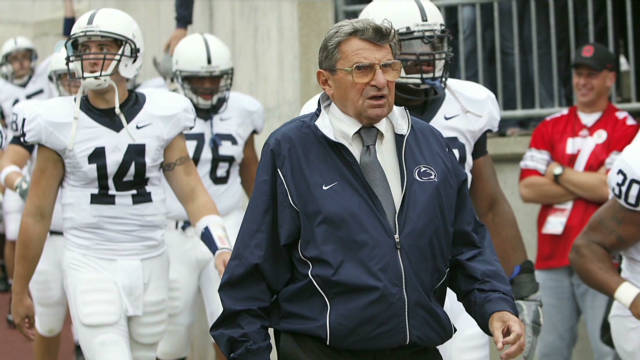 Penn State head coach Joe Paterno announced he will be retiring at the end of the 2011 football season.
November 9th, 2011
01:45 PM ET

“What a sad day for PSU.” - redleg
“So, Joe wants us to pray for the victims. I have to wonder if he has been doing this for the past 12 years.” - bear
“Sad way to end a great career, but sadder still that he did not call police.” - Vic

Days after details of the scandal broke, furor over Paterno’s inaction increasingly led to demands for his dismissal. But CNN.com readers have been torn. Some say the focus should be on Sandusky and that calling for Paterno’s demise amounts to nothing more than a witch hunt. But other readers strongly disagree.

Jeff said, “You people need to give it a rest...don't you read the news? The majority of the students and alumni are standing behind Paterno. He has done more for the university and more for athletes than you will ever do in your life. He has earned our support and the benefit of the doubt. Thousands of students gathered in support of him at this home. You are hardly hearing anything about Sandusky in all of this. The headlines should be about him not Paterno.!”

David said, “This whole situation is STUPID! If I hear an allegation of misconduct at a place of work, I would report it to my superiors - which Mr. Paterno did. It is the responsibility of the person who witnessed criminal activity to report it to the police. The sports radio talk show hosts have been grilling him about not doing more about these allegations, ALLEGATIONS! They have used this for their own personal gain, the selfish slobs that they are. A respectable gentlemen like Joe Paterno deserves far better than this.”

Anonymous said, “I know Joe, or at least I did 20 years ago. He met his legal obligations, but not his moral ones. If this had been some random Duke coach or something, I wouldn't expect anything else. But I expected more from JoePa.”

Cheryl said, “Why is he allowed to stay until the end of this season. He should be booted immediately! Disgusting!”

Glenn said, “Don't comment on the man's character if you don't know him. I happen to. Paterno reported the abuse to George Schultz immediately. Schultz was the head of the university police. In other words, Joe reported this to the police. Joe is being run out of the position over BS allegations that he somehow failed to report. Also, don't blame Mike McQueary. He reported it. Without his eyewitness testimony, Sandusky likely would not have been indicted. I hope Spanier gets crucified because I am positive he knew about this and helped cover it up.”

Jmdb25 said, “No one is saying Joe Pa was a part of the abuse. He was a part of the cover up. Really who does Joe report to at PSU? No one! This was not a witch hunt rather a very serious cover up by top and lower level officials at this campus. All to save football. Very sad.”

Leesure said, “Let's not forget who was at fault...Sandusky. Paterno reported it. Would I have preferred he follow up when it was clear there was a cover up going on? You betcha, but he did what he was supposed to do. Blame Sandusky. Blame those who failed to report it. Let Paterno retire and live with his disgrace.”

Matt said, “Why should you be fired for committing no crime? JoPa has earned the right to leave on his terms. He built that University and football has paid a lot of the university's bills for a long time. Sandusky will pay for his crime. No need for the witch-hunt.”

Tony Hopp said, “Actually, Matt, failure to report a crime IS a crime.”

MEP said, “'All that is necessary for the triumph of evil is that good men do nothing.' -Edmund Burke”

Bellabiv Devot said, “With what happened, that's not good enough. He needs to go ASAP.”

Mark said, “If McQueary tells Paterno in 2002 that he saw Sandusky and Joe's grandson in the shower, is Sandusky in prison today?”

PSU Alumnus said, “Let's all remember the real criminal is Jerry Sandusky if the allegations prove true; which highly likely they will. Paterno indirectly admitted that in hindsight he could have done more which further suggests Sandusky is quilty. For many PSU staff to know about Sandusky's secret life and to still allow him to grace PSU property all those years. Unthinkable.I hope the victims can all recover from this horror and move on with their lives.”

mlt1473 said, “If he truly wants to help the university, walk away NOW, forgo any and all retirement benefits he is currently set to receive (or better yet – put it all into a trust to help the kids whose lives were RUINED by his ego) and swear publicly that he will cooperate fully with all investigations into these atrocities, and grovel for forgiveness to the victims (in person with no damn camera crews).”

banasy© said, “So the witch hunt was successful. I hope to see every other University official, from the President on down, step down, also. They hold the same culpability in this shameful matter as Joe Paterno.”

Ellen said, “It's a sad, sad day for Penn State. Sad for the victims, and sad for a man who's dedicated his life to the school, only to see himself become a scapegoat in a horrific scandal.”