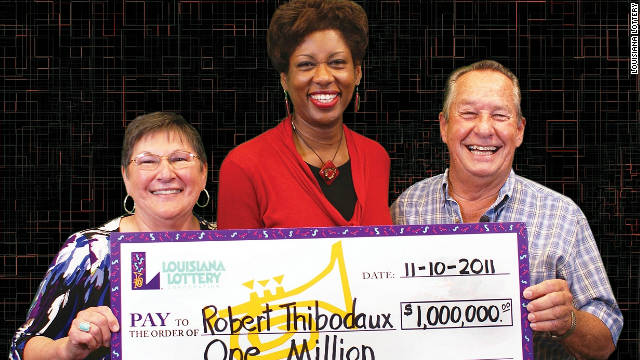 A Louisiana lottery winner says a cashier’s mistake made him hundreds of thousands of dollars richer than he should be.

Robert Thibodaux Sr., of Thibodaux, Louisiana, on Thursday claimed a $1 million Powerball prize at the state’s lottery headquarters, an amount five times greater than it would have been had a clerk not mistakenly upgraded his ticket, he said.

“I’m a lucky person - I won a lot of money. But this lady who sold me the ticket is a big part of this,” Thibodaux said Thursday at Louisiana Lottery headquarters in Baton Rouge.

Thibodaux, 70, matched five numbers in the October 29 drawing but missed the Powerball number, Louisiana lottery officials said. Ordinarily, that would win a $200,000 prize.

But when he bought that and a second Powerball ticket at a Shop Rite in Thibodaux, a cashier mistakenly added the Power Play option to both, he said. That option, which cost Thibodaux $1 extra per ticket, multiplies non-jackpot prizes by up to five times.

He paid the extra $2 for his tickets. The day after the drawing, his wife told him he matched five numbers, and he figured he won thousands of dollars.

But he didn’t have time to check, because he needed to visit a relative at a nursing home. When he returned, several family members were waiting for him, he said.

Thibodaux told CNN affiliate WGNO last week about his win and the mistake, but lottery officials wouldn’t confirm his story until he arrived at lottery headquarters with the ticket on Thursday.

Lottery spokeswoman Kimberly Chopin said cashiers cannot cancel tickets even if they make a mistake, such as printing a $2 Power Play ticket instead of a $1 regular Powerball ticket. So, if Thibodaux had refused the ticket, the cashier would have had to sell it to someone else or buy it herself.

“Sometimes mistakes are a good thing,” she said of Thibodaux’s win.

Thibodaux, a commissioner on the Bayou Lafourche Fresh Water District board, said the cashier declined to come forward with him on Thursday, saying she “didn’t want to get too much involved with this.” But he said he would cut her a check of an unspecified amount as a reward because "she’s a big part of this,” he said.

Marti Pitre, an employee at the Shop Rite, told CNN by phone that the worker who sold the ticket wasn't immediately available. But she said the worker acknowledges making the mistake.

"She hit the wrong button, and he just said, 'Don't worry about it,' and gave her another dollar" for the Power Play, she said.

Pitre said customers are now asking for mistakes on their tickets, too.

"Everyone that comes in, they say, 'Mess up on my ticket, win me $1 million,'" Pitre said.

Thibodaux said he and his wife, Brenda, will use some of the money to build a new home.

He received $700,000 after federal and state withholding, and the Shop Rite will receive a $10,000 bonus for selling the winning ticket, Louisiana Lottery said.

Thibodaux’s win comes just weeks after a Georgia woman said she won the September 14 $25 million Powerball jackpot only because a store clerk had misunderstood which lottery ticket she wanted to buy.

Kathy Scruggs, of Lithonia, Georgia, said she had asked a clerk for a Mega Millions ticket, but received the winning Powerball ticket instead.