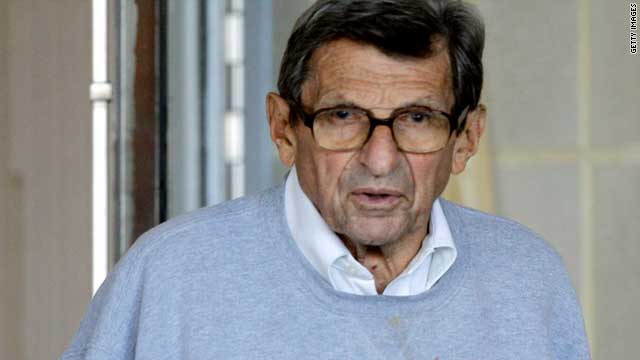 The Internet and much of the nation Thursday was abuzz with talk of Penn State and the ouster of its legendary coach, Joe Paterno.

As fans, observers and pundits come to terms with the child sex abuse allegations in Happy Valley and Paterno's unceremonious firing, the head scratching has begun.

Social-networking sites and Internet forums were full of musings about Penn State, the coach, his legacy and the allegations, while TV's talking heads and radio piled on about the scandal. Paterno, the winningest coach in major college football, has faced withering criticism over his response to the child rape charges against ex-assistant coach Jerry Sandusky.

NPR's Michel Martin questioned a society that has stood idly by one time too many.

"Can I just tell you? It's easy to sit here and condemn these people, rage against them. And I will confess I've spent more than a few minutes composing in my head the insults I'd like to deliver to them all. If you've ever been victimized, is there anything worse than knowing that someone knew, that someone could have helped you, and didn't?" she asked.

One day after Penn State students took to the streets, many of them are grappling with the loss of the only thing in their lives they've come to regard as constant: "Joe Pa" barking on the sidelines amid a cadre of hulking Nittany Lions players.

State College, site of the Penn State University campus, was trending on the popular microblogging site Twitter. And users were scolding the school for what it purportedly did or did not do. ŌĆ£From day 1 it's hard to argue that Paterno WASN'T a key part of the cover up," tweeted @NFLGoodWitch.

Even celebrities were not above the fray.

Actor Ashton Kutcher apologized for a tweet he sent out Wednesday in support of Paterno, saying he didn't have the "full story." "How do you fire Jo Pa? #insult #noclass as a hawkeye fan I find it in poor taste," he said in a post that has since been deleted.

Commentators did as well. New York Times columnist Maureen Dowd spoke of a ŌĆ£personal foulŌĆØ committed by those in power at Penn State in the wake of the allegations.

ŌĆ£Like the Roman Catholic Church, Penn State is an arrogant institution hiding behind its mystique,ŌĆØ she wrote. ŌĆ£The Paterno cult of personality tried to strike back. Students protested, clinging to the mythical hero they did not want unmasked.ŌĆØ

Paterno reported the allegations to his boss. Pennsylvania's attorney general has said it appeared Paterno had met his obligations under state law, but critics have said the coach should have reported the suspected abuse to police.

But many felt that taking shots at the longtime Penn State coach was obscuring the real issue.

Award–winning columnist Mitch Albom of the Detroit Free Press openly pleaded that the accused should remain the focus of the scandal.

ŌĆ£Sandusky is the story. Sandusky - and the victims. Many of them are young men now. They face a lifetime of nightmares and issues with intimacy and trust. Ask any expert. The damager may have gone away. The damage never does," Albom wrote.

"We should not lose sight of this in the rush to crush the biggest name in the paragraph,ŌĆØ he said.

Meanwhile, ESPNŌĆÖs Poynter Review project blog chastised the sports network for not recognizing the enormity of the allegations against the Penn State program.

ŌĆ£With the biggest staff of sports journalists in the world, ESPN should have been leading the charge to ask tough questions and shed light on this scandal," the blog said. "The tone of the early ESPN coverage was spotty - sometimes getting it right, but more often seeming inappropriate. It wasn't until mid-afternoon Tuesday that ESPN finally seemed consistently to ask the right questions and find the appropriate moral outrage. That's 72 hours after the story first broke.ŌĆØ

In a front-page editorial, the Penn State student newspaper captured the angst of a conflicted student body.

"This was not the way the most legendary coach in college sports was supposed to go. Wednesday night was an embarrassment for Penn State," The Daily Collegian said.

Even Happy ValleyŌĆÖs institutions felt they too needed to apologize, or perhaps rebrand themselves after so much association and influence with the man who has embodied the place.

On Happyvalley.com, a post titled ŌĆ£Unhappy Valley,ŌĆØ perhaps said it best: ŌĆ£Like many alumni and fans we feel angry at the current administration and confused about how to express this anger amidst the love we still feel for our school and our team. We are sad, we are embarrassed, we are furious. And yet, we are, still and always, Penn State.ŌĆØ

12:01 am ET June 23, 2021 RETWEET
For many members of the global #FreeBritney movement, an appearance by the singer at a court hearing on Wednesday fŌĆtwitter.com/i/web/status/1ŌĆ”lS
cnni

11:58 pm ET June 22, 2021 RETWEET
A woman in Thailand found an unexpected visitor in her house in the middle of the night last weekend ŌĆö a wild Asiantwitter.com/i/web/status/1ŌĆ”aVTh
cnni