The Department of Veterans Affairs will require many of its frontline health workers to be vaccinated, a senior offâ€twitter.com/i/web/status/1â€¦Bm 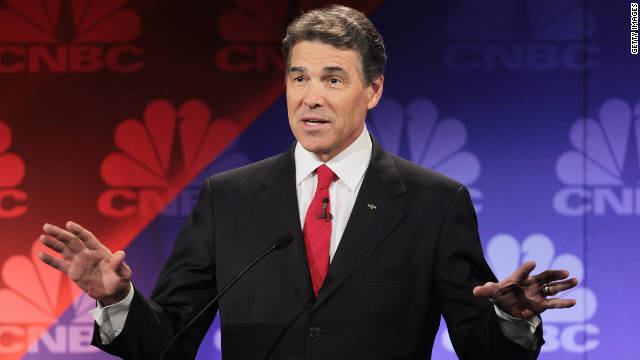 Two of the three agencies Texas Gov. Rick Perry wanted to eliminate were the Departments of Education and Commerce.
November 10th, 2011
01:34 PM ET

Overheard on CNN.com: What's behind the 'oops' is worse

"How can an entire lineup of candidates start at point zero and continue to dig themselves into a hole? They need to call in the anomaly scientists on this one."–JustTruth1

An 'oops' that could mean 'over' for Perry

Responding to a question about working across the aisle with Democrats, Texas Gov. Rick Perry introduced his own agenda - cutting three federal agencies - and then blanked out on the third. Debate expert Todd Graham says his gaffe will do major damage to his presidential bid, reinforcing earlier bad impressions. Most CNN.com readers said the gaffe was less important than his policies.

thadea said "His policies, not his 'oops moment,' should have been his ruination." barbie1311 said, "I totally agree. I would never judge him based on that alone." TheRealist20 said, "Keeping this ignoramus out of the presidency is what really matters."

bardfast said, "Sorry Rick, but itâ€™s not your 'oops' that has sunk you. You deny evolution. We deny your bid for the White House."

tmch4006 said, "I will vote for Obama, regardless of the GOP candidate that is selected. However, I do feel bad for Perry. I've had my moments where something I know very well slips beyond my ability to speak about. It simply means I've had a temporary brain fart. I always recover and hate the idea that people would think I'm dumb because of it. I doubt Perry is dumb ... ignorant, perhaps."

sunpacific said, "That the fifth candidate is goofy is not big news. The big news is that Republicans were actually rushing to anoint this goofball to the presidency before they even knew him. The biggest news is how scary the teapublican lack of judgment truly is."

jkota11 said, "This may be the most pathetic lineup of candidates in U.S. history." markmaximus said, "Huntsman, very smart and nuanced, speaks Mandarin Chinese! What is he doing with these clowns?"

captcorajus said, "One would think that the Republicans had a fairly easy election win considering how the economy is still tanking. A sour economy is frequently the death knell for an incumbent president, yet, this group of right-wing extremists - and dare I say, DUMB candidates - is agonizing to watch."

DzickDzock said, "He should have stuck with his thoughts on skipping the rest of the debates. At least then people would be left to guess what he's made of. Now, he's erased all doubt."

bstnfeeparty said, " 'I would ... I would do away with the education.' LMFAO, that is, I would laugh if it were not so painfully true, and sad." barbie1311 said, "In his defense, one has to remember that these guys live mostly in Jesus land, where it doesn't matter what you know, but what you believe."

newstradomus said, "OK, so Perry is pretty much finished, Cain isn't going to survive the primaries, and the tea party hates Romney; it's looking better for Ron Paul!" chrissl said, "Paul appeals to the same 10%, no matter what. Now and forever."

VinceK said, "From your lips to God's ears: 'I would love for Paul to be the nominee!
Love,
Democrats' "

If you're looking for one of the most efficient cardio workouts that anyone can do anytime, anywhere, you only needâ€twitter.com/i/web/status/1â€¦gS
cnni

6:01 pm ET July 26, 2021 RETWEET
Tropical Storm Nepartak was sitting off the eastern coast of Japan on Monday night and is expected to make landfallâ€twitter.com/i/web/status/1â€¦fs
cnni

5:30 pm ET July 26, 2021 RETWEET
Rather than helping alleviate isolation, virtual contact during the Covid-19 pandemic has been more likely to resulâ€twitter.com/i/web/status/1â€¦NZ
cnni

5:00 pm ET July 26, 2021 RETWEET
Climate and infrastructure experts have been warning for years that London isnâ€™t ready for climate change, with lartwitter.com/i/web/status/1â€¦nZIz
cnni