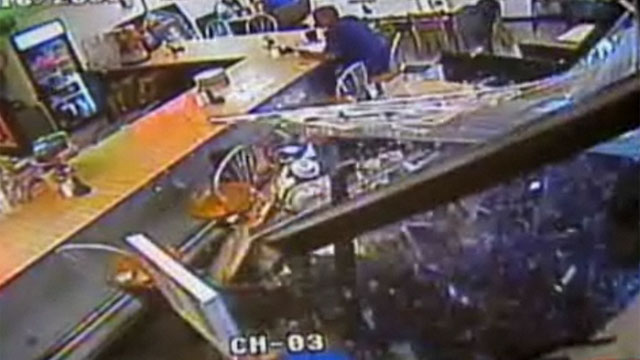 Video inside a North Carolina restaurant shows a car crashing through a wall.
November 11th, 2011
11:03 AM ET

Cars, buildings and cameras. You’re bound to get some good footage when they mix. You Gotta Watch these cars roll into a bike shop, smash into a diner and crash through a house. Amazingly, nobody was seriously injured in these incidents.

Dash cam dash – An Oregon police officer was responding to a call when he lost control of his vehicle and crashed into a house. Watch the incredible dash cam footage as the car flies into the building. Also see the homeowner’s response when he watches the video for the first time.

Drive-in restaurant – In North Carolina, a woman crashed into a diner while trying to park. See the car knock a booth — plus a customer — out of the way. What’s really unbelievable is the guest’s reaction.

No brakes at this bike shop – A car crashed through a California bicycle store as the driver mistakenly hit the gas instead of the brake. See the car come within inches of hitting two people as it plows through stacks of bikes.