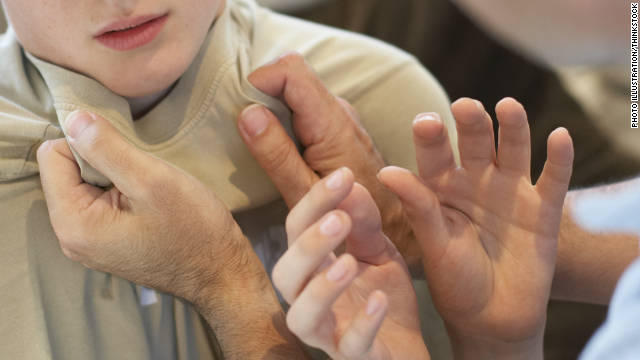 Most children are abused by someone they know and trust, the American Psychological Association says.
November 11th, 2011
01:14 PM ET

Overheard on CNN.com: How do we protect children?

"People prefer the stereotype of the bush-dwelling, candy-waving, trench-coat-wearing, ... van-driving pedophile because it is far safer than the reality." - Stitches77

News stories such as the Penn State sex-abuse scandal raise questions about how to identify a sexual predator or to know if a child is being secretly abused. Two CNN.com reports on those concerns prompted some readers to suggest ways to protect children and even to tell their own stories of sexual abuse.

The myth of the 'monster' pedophile

BethTexas1 said, "Parents have a responsibility to teach their children to listen to that nagging feeling that tells them something is not right with a person or situation. In most cases, they're right. Also, times have changed, and those meek little mommies who teach their children to worship adults and be good little boys and girls are setting their kids up for this kind of thing."

DeathStalker said, "I often instinctively like or do not like a person from the first five minutes of meeting them. I have ignored that instinct in the past and been burned by it. I now pay much closer attention to that instinct. I use this not only at a personal level but at a professional level as well."

JenLaw said, "We had a pedophile try to become the youth leader in my church. Being that I'm a rape survivor, I spotted it right off, but did I have a fight on my hands. I actually had to get people he raped come forward and identify him as a rapist before my own church would believe it."

swans13 said, "As a girl I was abused weekly by my model-citizen Dad, so when I became a mom, I was very open with my three boys about this subject. However, I made a mistake by telling them I'd 'kill' anyone who harmed them because that may have kept them from coming to me for fear I'd end up in jail. Keep your cool when talking about the lengths you'll go to protect them, and let them know you're smart enough to protect them no matter what they have to tell you."

chuckwebb said, "When I was 14, my Sunday School teacher in (North Carolina) ... and I began to have a relationship until I was 16. He got married, he bought me gifts, took me on vacation and scared me for life. It's hard to adjust when your innocence is taken away. No therapy can make you feel secure and safe."

cloud91977 said, "My abuse went unreported for years because my stepfather threatened to kill my mother if I told her or anyone else. He sexually and psychologically abused me between the age of 7 or 8 to 10 years old. He was a minister and would always make me kneel and pray ... after he was finished abusing me. Please parents, if your child is acting out, make sure that they aren't going through hell before you get too mad at them. Sometimes there's a lot more going on than brattiness."

Farwalker said, "My parents did nothing to protect me from a predator. They allowed what sensible people would consider to be inappropriate behavior both in and out of their view. At 12, I was allowed to have private hangout time with the 'family friend.' I was permitted to sit on his lap during a movie in our home with other church friends. He had two steady years in which to 'groom' me for his advances. And when I finally called the police to report the abuse, I was left standing alone. My parents didn't even accompany me for the deposition.

"There were warning signs. I became anorexic; I stopped wearing makeup or styling my hair. My grades slipped. I got into fights at school. I went from a pretty, athletic, accomplished teenager to a wan, withdrawn little ghost. And no one said a word the whole way down. Parents, don't let my story become one that your own kids tell one day. Love them. Let them know they can tell you about problems without judgment. And above all, be the guardian of their innocence. You can prevent abuse simply by being there."