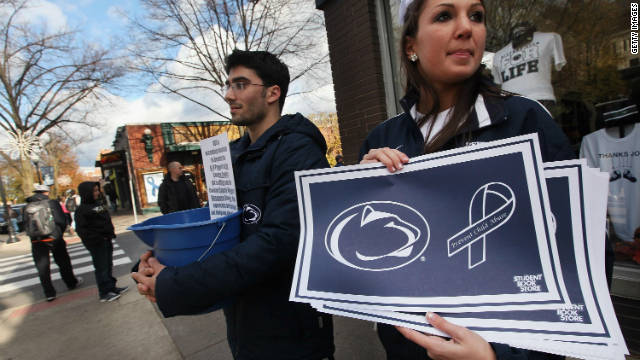 The Penn State scandal continues to hold its grasp on the news cycle this week after a large spotlight was shone on the school on Saturday during their first game without Joe Paterno at the helm.

A moment of silence was held before the game in honor of the alleged victims. Current and former players from Penn State and Nebraska locked arms amid thunderous applause from more than 100,000 fans - many of them wearing blue, to focus attention on child abuse - in attendance.

But there's still much to know about this story and many opinion's on how it will progress, how it has already been handled and what the most important issues about the case are.

So here's a look at the 5 reads you need on the Penn State scandal:

CNN's Wayne Drash examines the timeline of what was happening on the field during the height of Sandusky's career and juxtaposes it with how the now-known scandal was unfolding at the time.

"The Penn State players scooped up their defensive coordinator and hoisted him on their shoulders. It was his final game, a crowning victory in the Alamo Bowl, a perfect ending for the coach's 32-year career.

One player said it seemed like "a Hollywood script."

It was December 1999, and Jerry Sandusky had announced his retirement before the start of the season. It was unexpected: the guy who'd spent three decades on the sidelines with legendary coach Joe Paterno wasn't even going to another team. Just 55 at the time, Sandusky had long been expected to replace Joe Pa.

But he was simply quitting.

Sandusky's career was deviating from the widely accepted script. And now, it appears, the Hollywood ending may have been just that - fiction. And possibly a faĂ§ade that covered dark, sordid secrets."

Pulitzer Prize-winning columnist Michael Goodwin writes for the New York Post examines about what he calls the "shameful silence" at the university during the time when the scandal was unfolding and why he believes that in the battle to do what was right, the people who needed to have courage simply lacked it.

"It is a clichĂ© to say that football is like life. At Penn State, it is also insufficient. For under Joe Paterno, football was life.

And now a glorious era is finished, demolished beyond redemption. The scandalous end of Paternoâ€™s career has wiped out the universityâ€™s sterling reputation and shattered the trust of an entire sport. Riots by crackpot students and death threats punctuate the madness.

To Pennsylvanians and millions of football fans everywhere, the fall of the House of Paterno is like the collapse of an empire. It crashed without warning or mercy.

In truth, the core values rotted away over the years, the work done secretly in the dark, like that of termites and cancer. The end only seemed sudden."

The cult of Penn State

Shawn Hubler writes for the Los Angeles Times about how growing up in Pennsylvania you knew "Penn State football was a revered, life-changing institution, one most people would never dream of questioning." Hubler, through her own experiences at the school and growing up in the area, examines why Penn State is viewed through the lens it is and how after hearing details about the scandal she can longer look at that revered school quite in the same way again.

"I grew up in central Pennsylvania, steeped in the myth of Penn State football. I was 4 when I learned the alma mater. By the time I was 10, I knew every player's number and name.

Every Saturday that there was a home game, we'd drive an hour from our tiny town "over the mountain," as my father called it, and sit high in the stands, in rain, snow or autumn sunshine. We'd do this cheer: "We are! Penn State!" The stadium would thunder. My parents had not even gone to college, but they'd yell it until their throats ached. Often, my mother would bring along her rosary beads.

"Worship" is not a strong enough word for the way we felt about Joe Paterno. Our regard for him was unquestioning. For one thing, he was Italian, like my mother. But the main thing, in our eyes, was that he was "classy." That was the word my parents used, always. The coach never bragged. He never gloated. He didn't put up with undignified antics. He made sure his players got a good education, like his, and were set for a life beyond football.

This was no small thing."

Penn State and the PR price of sainthood

Eric Dezenhall, writing for the Huffington Post, puts the Penn State scandal in the context of other public relations nightmares and how in this age of faster-than-light digital information, fixing an image after a scandal requires an entirely different approach.

"The Penn State scandal not only marks the end of Coach Joe Paterno's brilliant career, it is the death knell for the old crisis management canard that a good reputation is a bulwark against future bad news.

Not anymore. Not in the face of the two-headed monster of really bad data points and the speed of today's informational vortex.

In fact, I would argue that in an age when everybody who has a return key on their computer is a "stakeholder" in the debate, the better your reputation, the greater the downward physics of the vortex.

It's about the contrast between what you've led us to believe about yourself and the new - and bad - information. Outrage moves at 100 times the speed of fact, and perceived hypocrisy is the accelerant that makes the vortex spin down faster."

Thomas L. Day, writing for the Washington Post, explains why as someone who went to Penn State and was a part of the Second Mile foundation, he views the scandal as the final pitfall of his parent's generation and a signal that the errors of that generation that we're seeing in Congress are similar to those we're now seeing at Penn State.

"I'm 31, an Iraq war veteran, a Penn State graduate, a Catholic, a native of State College, acquaintance of Jerry Sanduskyâ€™s, and a product of his Second Mile foundation.

And I have fully lost faith in the leadership of my parentsâ€™ generation.

I was never harmed by Sandusky, but I could have been. When I was 15, my mother, then looking for a little direction for her teenage son, introduced me to the Second Mileâ€™s Friend Fitness program. It was a program resembling Big Brother, Big Sister with a weekly exercise regimen.

Instead of Sanduskyâ€™s care, I was sent to a group of adults, many of whom were in their 20s. They took me from a C-student to the University of Chicago, where Iâ€™m a masterâ€™s student now. They took the football teamâ€™s waterboy and made a 101st Airborne Division soldier.

I was one of the lucky ones. My experience with Second Mile was a good one. I should feel fortunate, blessed even, that I was never harmed. Yet instead this week has left me deeply shaken, wondering what will come of the foundation, the university, and the community that made me into a man.

One thing I know for certain: A leader must emerge from Happy Valley to tie our community together again, and it wonâ€™t come from our parentsâ€™ generation.

@patrickokeefe Well this is a big hello to Mama Oâ€™Keefe!
sarasidnerCNN

@patrickokeefe Well this is a big hello to Mama Oâ€™Keefe!
sarasidnerCNN