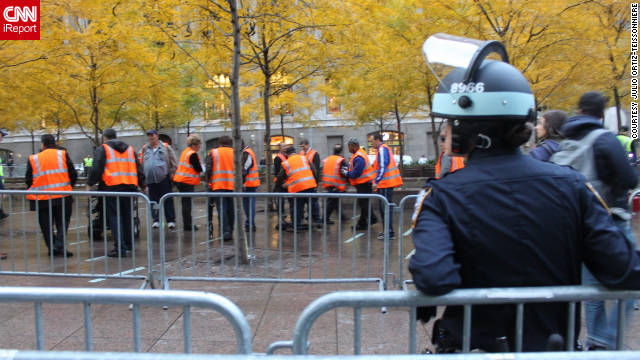 Zuccotti Park is empty after NYPD came through early on November 11 and evicted the Occupy camp.
November 15th, 2011
04:49 PM ET

New York Supreme Court Justice Michael Stallman has ruled not to extend a temporary restraining order that prevents the eviction of protesters who were encamped at Zuccotti Park, long considered a home base for Occupy Wall Street demonstrators.

Earlier Tuesday a New York judge issued an order Tuesday allowing Occupy Wall Street protesters to return to Zuccotti Park, just hours after scores of riot police ordered them out and tore down their tents.

The order from New York Supreme Court Judge Lucy Billings allowed protesters to bring tents and other equipment back into the privately owned park where the now-global Occupy movement began. Police, however, did not immediately let them in, after city officials expressed health and safety concerns about the park just as the winter months roll in.

Soon after the ruling, a large group of demonstrators - some of them apparently holding the court documents - marched back to Zuccotti Park and presented the documents to police.

The operation to clear the park began around 1 a.m., according to Bloomberg, with police handing out notices from the park's owner, Brookfield Office Properties, that said the continued occupation posed a health and fire hazard.

"You are required to immediately remove all property, including tents, sleeping bags and tarps, from Zuccotti Park," the note said. "That means you must remove the property now."

Police in riot gear then moved into the park, evicting hundreds of protesters.

Dozens of protesters who had camped out at the Lower Manhattan park since September 17 linked arms in defiance. Many chanted, "Whose park? Our park" and "You don't have to do this."