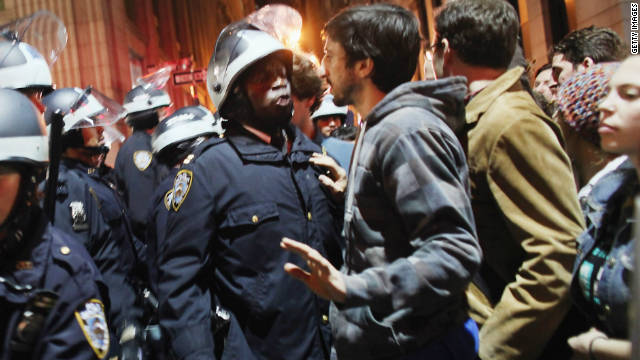 The Reads You Need: The raid on Occupy Wall Street

You'd be hard pressed to find a subject that elicits more opinions than the Occupy Wall Street movement. We've seen everyone - and their mother - opine on the movement and its members. What should they do? Why isn't there a leader? What is success?

For the most part they've been nebulous conversations about vague ideas.Â  Commentators have said that the time will come when a decision has to be made about how Occupy should move forward. At its heart it remains a movement of ideas. And those ideas evolve. But as concerns about public health and acts of violence taking place at some of the "home bases" for the Occupy protests mount, more attention has focused on where the movement might go next.

That question has grown more complex since Mayor Michael Bloomberg announced police would oust protesters from camping in New York's Zucotti Park. A similar raid took place in Oakland, California, on Monday when police moved in to the Occupy encampment at Frank Ogawa Plaza near City Hall. The situation in New York intensified after Occupy protesters were able to secure a temporary order allowing the group to return to Zuccotti Park - just hours after scores of police in riot gear forced them out.

So here's a look at the 5 reads you need on the Occupy movement right now:

Did Bloomberg do Occupy Wall Street a favor?

Ezra Klein, writing for the Washington Post, asks whether, in the long run, Mayor Michael Bloomberg may have helped moved the Occupy agenda forward as winter approaches.

The occupation of Zuccotti Park was always going to have a tough time enduring for much longer. As the initial excitement wore off and the cold crept in, only the diehards - and those with no place else to go - were likely to remain. The numbers in Zuccotti Park would thin, and so too would the media coverage. And in the event someone died of hypothermia, or there was some other disaster, that coverage could turn. What once looked like a powerful protest could come to be seen as a dangerous frivolity.

A police raid suffused with symbolism

Glenn Greenwald has been writing about the evictions this morning for Salon.com and took the opportunity to opine on the eviction order's symbolic meaning for the Occupy movement based on Justin Elliott's reporting for Salon about how things went down in Zucotti Park. Elliott described the scene as "a military style raid on peaceful protesters camped out in the shadow of Wall Street, ordered by a cold ruthless billionaire who bought his way into the mayorâ€™s office." Greenwald called it a symbolic moment from perhaps the most perfect person in Mayor Michael Bloomberg.

"If you think about it, that short sentence is a perfect description of both the essence of Americaâ€™s political culture and the fuel that gave rise to the #OWS movement in the first place.

A New York state judge this morning temporarilly enjoined the city from keeping the protesters out of Zuccotti Park, but Mayor Bloomberg is simply ignoring the Order and deliberately breaking the law by refusing to allow them back in. Put another way, Bloomberg this morning has broken more laws than the hundreds of protesters who were arrested. But as we know, the law does not apply to the Michael Bloombergs of the nation; the law, instead, has simply been exploited into a weapon used by the politically and financially powerful to prevent challenges to their standing.

Could #OWS have scripted a more apt antagonist than this living, breathing personification of oligarchy: a Wall Street billionaire who so brazenly purchased his political office, engineered the overturning of a term-limits referendum and then spent more than $100 million of his personal fortune to stay in power, and now resides well above the law?"

Occupy Wall Street's eviction was a lucky breakâ€”now what?

Derek Thompson, a senior editor at The Atlantic, writes that if the Occupy movement is to progress, it has to be defined by its core values not its core meeting ground.

"What should be the Eight-Hour Day Movement of the moment? Maybe they should focus on student debt reform. Today, student debt lives with you until you die and cannot be unwound in bankruptcy court; perhaps it should be. Maybe they should focus on the minimum wage, which has declined in real value for the last few decades. Maybe they call for repealing the Bush tax cuts, a savvy request that would represent broad sacrifice (it would raise taxes on almost all households, but mostly at the top) to demonstrate to Americans that the movement is willing to sacrifice for its ultimate goals. There is also welfare reform, unemployment benefit support, and other platforms that would aim to support the least well-off.

To persuasively argue for these things does not require a permanent home base cobbled together from camping tents in a private park. If Occupy Wall Street is ultimately about where protesters can and cannot physically be, then it's already sacrificed macro strategy for logistical tactics.

OWS has its newspeg. It's time to write the larger story. To get moving again, Occupy Wall Street doesn't need to re-pitch its tents. It needs a bigger tent."

4:45 pm ET October 15, 2021 RETWEET
Debbie Blount is, for the most part, your average college undergrad â€” with piles of homework and a packed after-schtwitter.com/i/web/status/1â€¦5p59
cnni

3:56 pm ET October 15, 2021 RETWEET
Rising sea levels are boosting the need for flood defenses, but structures by the shore can come at a cost to the mâ€twitter.com/i/web/status/1â€¦ui
cnni