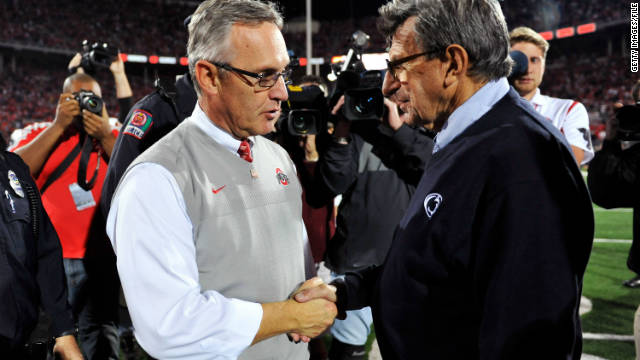 Ohio State and Penn State both lost their iconic head coaches to different scandals since they met in Columbus in 2010.
November 16th, 2011
07:18 AM ET

Ohio State to Penn State: We support you

When Penn State arrives for their first road game since the child rape allegations involving Jerry Sandusky broke, they will arrive at a school that knows something about scandals.

That's why Ohio State says they plan a warm welcome for the Penn State football team in Columbus, Ohio, this weekend, and are asking students to do the same.

Jared Kamrass, the undergraduate representative to the University Athletic Council, spoke at a pre-game press conference this afternoon, announcing that OSU students attending the game Saturday should come to the game, looking to represent the campus by being well-behaved at the game.

â€śSeparate to football, we will also be unveiling a social media campaign, encouraging students to change their Facebook and Twitter profile pictures, to an image we have designed, that honors the victims of the alleged tragedies at Penn State,â€ť Kamrass said.

The image includes a blue ribbon which is a common symbol for child abuse prevention. 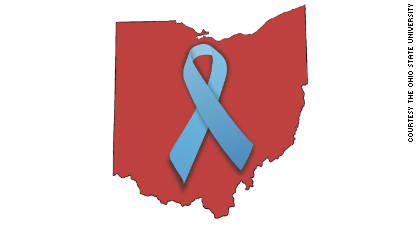 Ohio State has asked students to change their profile pictures to this logo.

Earlier this year, Ohio State's Jim Tressel, who was seen by many as above reproach, resigned in disgrace after withholding program violations from the NCAA. The Ohio State college newspaper, The Lantern, posted an article about how Joe Paterno's departure sparked reactions similar to what happened with Tressel.

While the OSU scandal was of a very different nature than the one at Penn State, the Buckeyes program was profoundly impacted by the allegations. Several players allegedly swapped team and personal memorabilia and equipment for tattoos and other benefits. Tressel became aware of the transactions, which violate NCAA rules, but did not report them on a form all coaches are required to submit.

Penn State's interim head coach Tom Bradley said he spoke to Luke Fickell, the Ohio State coach, both of whom were thrust into the limelight over their schools' scandals. The two men discussed activity the teams would engage in for the game but Bradley didn't elaborate on what that would be. Last week at Penn State's game against Nebraska, there were dramatic gestures of support for victims of child sex abuse.

Kamrass said they are planning to send an e-mail to the 60,000 members of the OSU campus, encouraging students to welcome fans and students from Penn State as they arrive on campus.

The Athletic Council also produced a video featuring student athletes from both the OSU football and basketball teams, speaking to the greater OSU community and encouraging a welcoming environment this weekend.

â€śThis is a very unique situation,â€ť Kamrass said. â€śWe want students to be loud and proud, but respectful. The students from PSU have nothing to do with the tragedy and were blindsided as much as everybody else.â€ť

Across the country, criticism of Penn State has festered over the scandal, but Bradley said he was assured by Ohio State officials that there will be no problems for his visiting team.

"It's still Ohio State-Penn State," Bradley said. "One of the things I want emphasize right now, this is all about the players. This is about our team. It's about their team."

Rover.com released its ninth annual report on the year's most popular pet names, which include thoseâ€twitter.com/i/web/status/1â€¦aD
cnni

4:00 am ET December 5, 2021 RETWEET
The death of a Sri Lankan woman who was detained after overstaying her visa has made headlines in Japan and fueledâ€twitter.com/i/web/status/1â€¦md
cnni

3:44 am ET December 5, 2021 RETWEET
Calling all filthy animals: Airbnb is renting the iconic "Home Alone" house for one night only this monthâ€twitter.com/i/web/status/1â€¦FY
cnni

3:01 am ET December 5, 2021 RETWEET
â€śI promise you itâ€™ll go away if you just keep at it, OK?â€ť US President Biden offered some words of encouragemetwitter.com/i/web/status/1â€¦BZeEn6Cb
cnni