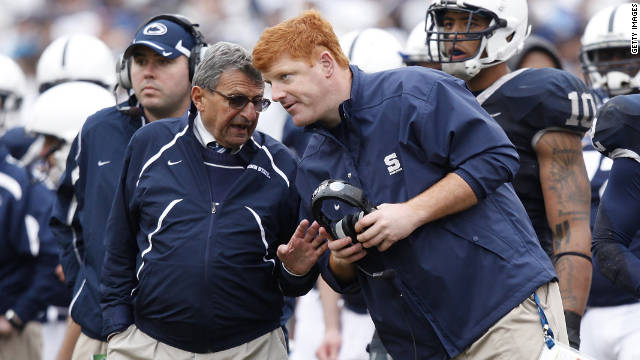 Overheard on CNN.com: Deciding when it's worth the risk to intervene

As commenters responded to a recent story about accusations against beleaguered former Penn State coach Jerry Sandusky, they also engaged in a thought-provoking discussion about the difficulty of knowing what to do in a potentially volatile situation.

Assistant coach made sure assault stopped, went to police, he says in e-mail

This story focuses on Mike McQueary, a Penn State assistant football coach, who has been criticized for not doing more in an alleged rape of a boy by Sandusky."I did stop it, not physically, but made sure it was stopped when I left that locker room," he wrote in a November 8 e-mail.

Many were very critical of McQueary and said they would have stopped an incident like the one alleged if they saw it happening. dsalvat1 said, "If I saw something like that, I would get arrested for beating Sandusky to a pulp. I could care less if I was fired, it makes me sick to my stomach how some of you have these 'flexible' morals."

Terryst said, "What DID McQueary see in that shower? Did he see his career ending? Did he witness the Greek tragedy this has become? Did he think about the consequences of speaking out? Did he think his silence would ever come screaming back to bite him in the ___?"

Jangocat wrote, "This lowlife is in damage control mode. The truth is he was more concerned with preserving his cushy job and his schools reputation than he was with doing what's morally right and protecting children."

But then there were others, like herbatious, who wondered: "You never know what you will do in that situation until it happens. People always 'know' what they will do, then rarely act accordingly when actually presented with the situation."

TEA4ever4ALL was also skeptical and wrote, "I have heard that from many people. As a past firefighter and one who has been around for years, I have seen many people say I would have. However, when they get in the real situation, they freeze or do something else. In other words, people will talk the big talk until it comes time to actually act. I'm sure that 1 in 100 people here would do exactly as they say. The other 99 are blowing smoke."

basketcase87 said, "To all those saying 'if I saw that I would...': You probably can't even imagine how disturbing that would be to see. This is one of those situations that you really can't understand, and know how you'd react unless you've been there. I'm sure most of us would like to think that if we lived in Germany during the holocaust, we would've done something, but the reality is most probably wouldn't have. Furthermore, everyone has different ways of dealing with things, and reacts differently. Just because McQueary didn't go into a rage and beat Sandusky to a pulp doesn't mean he didn't do what he could to rectify the situation."

What do you think about commenters' assessments? If you had to act quickly in a hypothetical volatile situation, how would you react?

Join the conversation below and in the latest stories on CNN.com. Or, sound off on video via CNN iReport.