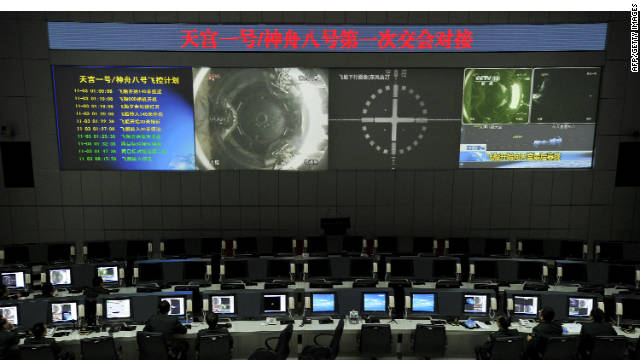 Chinese scientists monitor the docking of the Tiangong-1 space lab module and the Shenzhou-8 spacecraft on November 3.
November 17th, 2011
11:50 AM ET

The docking is a key step toward Beijing’s goal of building a space station.

Shenzhou-8 docked twice with the lab module Tiangong-1 more than 210 miles above Earth, Chinese space officials said. Shenzhou-8 - a type of capsule that would carry astronauts in a nontest situation - disengaged from Tiangong-1 for the final time Wednesday before being brought back to Earth on Thursday.

Tiangong-1, which China launched in September, will wait in space for two more Shenzhou docking missions - at least one of which will be manned - planned for 2012, according to Xinhua.

China launched Shenzhou-8 from the Gobi Desert on November 1.

China sent its first astronaut into space in 2003, the first stage in a "three-step" strategy to develop its manned engineering project. The launch of the Tiangong-1 lab module was the second step. If successful, it will be followed by the last phase: to build a permanent space lab that will allow astronauts to conduct long-term space experiments.

According to Xinhua, Beijing hopes to build a space station by around 2020.

- CNN's Jaime FlorCruz and Haolan Hong contributed to this report.