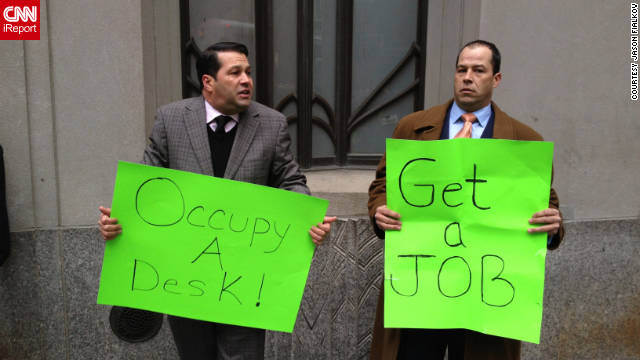 Overheard on CNN.com: Protest fatigue sets in for some

The Occupy movement swarmed cities Thursday as part of a "mass day" that saw protesters in New York making their first major show of strength since camps were cleared from Zuccotti Park. Large groups also gathered in Los Angeles and Portland, Oregon.

Several commenters said they were growing tired of the ongoing demonstrations, but others said they wanted to see the movement continue.

There was lots of back-and-forth debate that seemed to move through generations.

johnnyhouse said, "They have a right to protest, peacefully, but what are their demands and fixes for our problems? No one has said a thing except they are not going to take it anymore. Reminds me of my sons, many years ago, when they tried to run the family at times."

But 27irishgirl replied, "The idea is to change the narrative to make you think. Because once you do, you will be horrified that what used be the largest democracy in the world no longer exists."

iReporter Jason Fialkov passed protesters on his way to work Thursday, including a person dressed as Cookie Monster and holding an Occupy Sesame Street sign. He also spotted two men that were encouraging people to grab a sign and join a counterprotest, and shared photos on CNN iReport. Fialkov said he does agree with the ideas underpinning the Occupy movement, but said he thinks many of the demonstrators are "misguided."

"I spoke with some people who seemed genuinely knowledgeable about how our financial system is backwards, but too many chaos-lovers and attention seekers have joined the rallies," he said.

FreThinker13 said, "America has heard you loud and clear, OWS.  You would rather take my wealth by force, than work hard, innovate, and take the calculated risks necessary to capitalize and create your own wealth.  Do America a favor, let the workers in the financial industry go to work and the small business owners to make a profit."

But Samson1975 wrote, "How can anyone in their right mind continue defending a system that's so broken? It harms the people it's supposed to serve and destroys the world around it. Shame on you. Future historians will look back and commend those who were willing to fight the good fight and take the moral high ground. As step one we need to stop private finding of political parties and bring in a publicly funded model. Stop the bribes!"

"I am 100 percent behind the Occupy movement. However, you need organization, a cohesive message and leadership to make it a real force. You need to remain peaceful or your support will erode. Let Michael Moore and others take your message to the people through the media and organize into peaceful marches/protests, I can't stress this enough. Passive resistance is your right but when it crosses into civil disobedience you cross the line into breaking the law."

Check out what readers are talking about, and let us know if you agree or disagree with what they're saying. Join the conversation below and in the latest stories on CNN.com. Or, sound off on video via CNN iReport.

If you've witnessed Occupy demonstrations in your area, contribute your photos and videos to the CNN iReport open story.