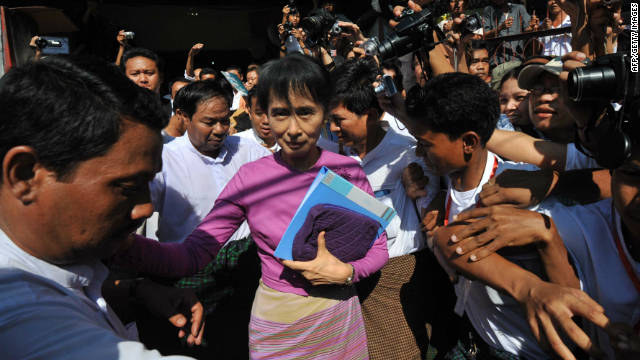 Myanmar's Suu Kyi to run in next elections

Myanmar pro-democracy leader Aung San Suu Kyi will participate in the next elections, Nyan Win, the spokesman for her National League for Democracy, said Friday.

Her National League for Democracy announced earlier Friday that it planned to re-register as a political party and participate in all future parliamentary elections.

The NLD won more than 80% of the legislative seats in 1990, the first free elections in the country in nearly 30 years, but the ruling military junta refused to recognize the results.

The elections, as yet unscheduled, are by-elections to fill 48 seats left vacant in parliament by the appointment of ministers in the new government. The last national elections were held in November 2010 and were the first in 20 years.

A white father & child side by side with a young Black brother stand outside Cup Foods. All of them with their fistâ€twitter.com/i/web/status/1â€¦aX
sarasidnerCNN

4:33 pm ET April 18, 2021 RETWEET
@MalzbergShow @jaketapper @miguelmarquez @CarolynSungCNN As I said there is NO excuse for random acts of violence nâ€twitter.com/i/web/status/1â€¦1q
sarasidnerCNN

4:16 pm ET April 18, 2021 RETWEET
The US Defense Department has confirmed that leaked photos and video of "unidentified aerial phenomena" taken in 20â€twitter.com/i/web/status/1â€¦Jq
cnni