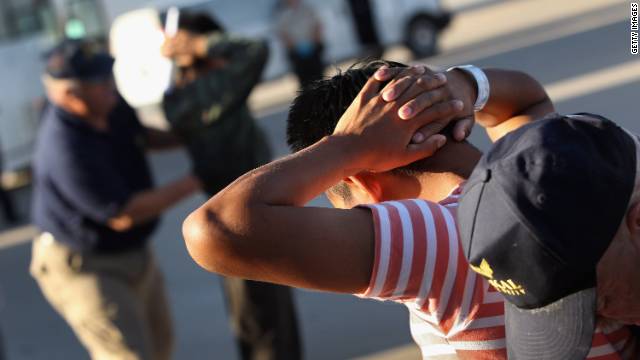 Undocumented Guatemalan immigrants are searched before boarding a deportation flight in June in Mesa, Arizona.
November 18th, 2011
10:44 AM ET

The Obama administration is deporting undocumented residents at a faster rate than that of any other president. Meanwhile, many southern states are pushing forward with their own immigration laws designed to achieve maximum deportation, as well.

In all, there is a national backlog of about 270,000 immigration cases. And that is a big problem for the courts, Atlanta immigration lawyer Charles Kuck says.

ŌĆ£WeŌĆÖre actually seeing far more cases because of the tough laws at the state levels. So the cases are getting slower here,ŌĆØ Kuck said. ŌĆ£So cases that should take four, five (or) six months are taking one and a half to two and a half years to get adjudicated.ŌĆØ

To help address the courtroom overload, both in the South and in other areas around the country, the Obama administration is trying to figure out which cases to pursue and which to drop, according to a memo released this summer by U.S. Immigration and Customs Enforcement (ICE) chief John Morton.

The New York Times reports the administration is finally implementing guidelines to actually implement the policies.

Administration to pare down immigration cases

Kuck says if ICE starts uniformly dropping low priority cases, it could be a help to long backlogs. But the real problem, as he sees it, is money.

The US Defense Department has confirmed that leaked photos and video of "unidentified aerial phenomena" taken in 20ŌĆtwitter.com/i/web/status/1ŌĆ”Bz
cnni

12:28 am ET April 17, 2021 RETWEET
SpaceX has secured a $2.89 billion NASA contract to build spacecraft that will land astronauts on the moon for theŌĆtwitter.com/i/web/status/1ŌĆ”Z2
cnni

12:12 am ET April 17, 2021 RETWEET
Billions of Tyrannosaurus rex roamed North America during their fascinating reign as top predators, according to aŌĆtwitter.com/i/web/status/1ŌĆ”4a
cnni