A week of challenges for Occupy Wall Street

Occupy Wall Street protesters say last week's evictions from Occupy encampments across the United States have reinvigorated the 2-month-old movement. Others say the moves by police hail the beginning of the end. CNN Radioâ€™s Steve Kastenbaum spent the week at New York's Zuccotti Park in Manhattan. Click the audio player to hear his recap of the week.

The New York City man's intended targets were U.S. military personnel who had served in Iraq and Afghanistan, as well as U.S. postal facilities and police stations, the mayor said.

He'd acquired all the material need for the explosive device, going as far as drilling holes into the would-be pipe bomb, a source said.

The alleged attacker had been monitored by the New York Police Department for about two years, according to the source.

Alfredo Perez Rubalcaba made the concession before a somber crowd of Socialist Party supporters - a stark contrast to the raucous, celebratory crowd gathered outside the Popular Party headquarters in Madrid.

According to updates from about 10:30 p.m. (4:30 p.m. ET) on the interior ministry website - at which point over 87% of all votes had been counted - the Popular Party had about 9.4 million votes (44% of the total votes counted) and was leading in the races for 187 seats in parliament. That compares with the just over 6 million votes for the Socialist Party, giving it an advantage in 110 legislative contests. 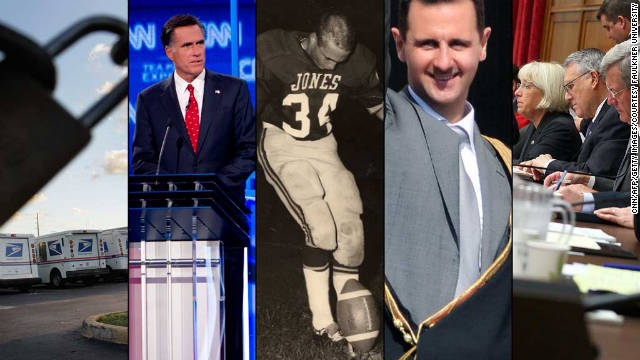 The U.S. congressional "super committee" charged with coming up with at least $1.2 trillion in spending cuts for the next 10 years might announce Monday that it will miss Wednesdayâ€™s deadline to recommend a plan, aides say. Â Regardless of whether some type of plan is offered before the deadline, the consequences of the panelâ€™s actions will be the subject of much discussion in Washington this week.

The panel was created over the summer as part of an agreement to raise the nationâ€™s debt ceiling. If the committee doesnâ€™t approve by Wednesday a plan to cut at least $1.2 trillion over the next 10 years, and if Congress doesnâ€™t pass that plan by December 23, then $1.2 trillion in automatic spending cuts are supposed to start in 2013. Those automatic cuts would be evenly divided between defense and non-defense spending and are said to be painful enough that neither Republicans nor Democrats would like to see them.

END_OF_DOCUMENT_TOKEN_TO_BE_REPLACED

The University of California at Davis placed two police officers on administrative leave after they pepper-sprayed non-violent protesters at point-blank range, the school announced Sunday.

Video of the Friday incident has led to calls for the resignation of UC-Davis Chancellor Linda Katehi, who made the announcement of the officers on leave in a written statement Sunday afternoon. Katehi said she shares the "outrage" of students and was "deeply saddened" by the use of the chemical irritant by campus police.

"As chancellor, I take full responsibility for the incident," she said. "However, I pledge to take the actions needed to ensure that this does not happen again."

The school said the 10 protesters arrested were given misdemeanor citations for unlawful assembly and failure to disperse. Eleven protesters were treated for the effects of pepper spray, which stings the eyes and induces coughing, gagging and shortness of breath.

Melanie Johnson, the executive director of the Philadelphia Marathon Race Weekend, said that race organizers "are deeply saddened" by the deaths.

The two runners' identities were not immediately disclosed, as officials were still working to notify their families. Johnson vowed that such information will be provided "as it becomes available."

"Our thoughts remain with the runners' families and friends," Johnson said.