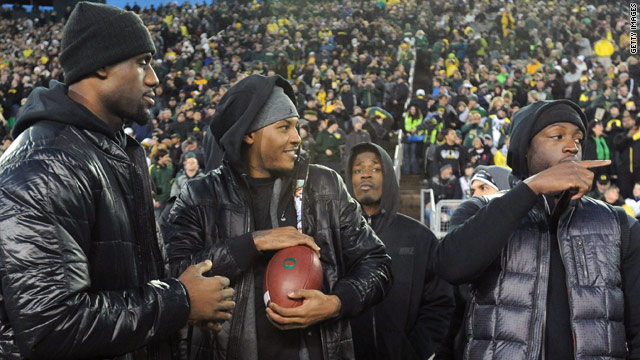 LeBron James is taking his talents back to northeastern Ohio - for one night in December.

James - who grew up in Akron and left the Cleveland Cavaliers for the Miami Heat before the 2010-2011 NBA season - will lead a group of NBA players in an exhibition game at the University of Akron's Rhodes Arena on December 1, the Akron Beacon Journal reports.

Joining James will be fellow superstars Chris Paul, Dwayne Wade and Carmello Anthony, plus two of the college draftees who the Cavaliers hope will return them to the NBA heights they enjoyed during James' reign in Cleveland, No. 1 pick Kyrie Irving and Tristan Thompson, the Beacon Journal reported.

Akron will be the first stop in the group's "Homecoming Tour," which also includes New Orleans on December 4, Chicago on December 7 and East Rutherford, New Jersey, on December 11, according to the report.

The games will be streamed live on Google+, which is sponsoring the tour, according to Business Insider. Proceeds from ticket sales will go to charity.

The tour will fill some of the free time the four NBA superstars have because of the current lockout, which has delayed the start of the season and may force its cancellation.

They seem to be spending plenty of time together recently, including attending Saturday night's big USC-Oregon college football game in Eugene, Oregon, according to a report in The Oregonian.

And Anthony, at least, plans to get involved with some presidential politics in December. He'll be among a number of current and former NBA players appearing in the "First Ever Obama Classic," a fundraiser game for the president's re-election bid, to be held December 12 in Washington.