Italian Prime Minister Giuseppe Conte has handed in his resignation, a political tactic geared to help him build a‚Ätwitter.com/i/web/status/1‚Ä¶Pn

A tornado described as "large and extremely dangerous" by the National Weather Service in Birmingham, Alabama, ripp‚Ätwitter.com/i/web/status/1‚Ä¶Ut 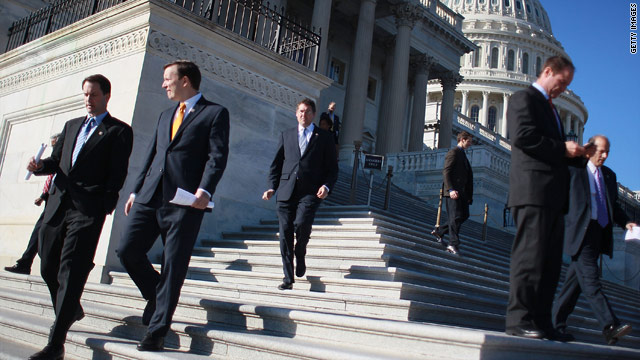 Lawmakers leave the Capitol on Friday to go home for Thanksgiving break while the 12-member "super committee" held talks.
November 21st, 2011
10:15 AM ET

The Reads You Need: Politics and failing debt talks

Editor's note: Each day, we'll bring you some of the diverse voices from our site and across the Web on stories causing ripples throughout the news sphere.

The congressional "super committee" charged with coming up with $1.2 trillion in budget cuts appears doomed for failure, with sources saying the panel will be unable to reach a deal before its practical deadline Monday.

The 12-member bipartisan panel's deadline for a final vote is Wednesday, but any blueprint must be made available 48 hours in advance of a committee vote and must be accompanied by a Congressional Budget Office analysis scoring how much it would reduce deficits.

If the panel fails to come up with the required cuts, automatic ones would be triggered in 2013 to reduce $1.2 trillion in spending, something CNNMoney calls the super committee's "escape hatch." Those cuts would be evenly divided between nondefense and defense items. If the cuts go that way,¬† Defense Secretary Leon Panetta says the U.S. armed forces would be crippled.

Of course, no one in Washington really thinks that will happen as Congress made the law requiring the cuts, and lawmakers can change it however they like before 2013 rolls around.

On Monday morning, pundits on the Web were pointing out that politics still rule in the few months before a presidential election year and the divide between Democrats and Republicans shows no signs of being bridged.

A blog on The Economist says the super committee is more atom-smasher than friction reducer.

"The theory behind the super committee was that it would be a superconducting committee, eliminating the frictions caused by hundreds of clashing representatives in the House and Senate and zooming everyone straight along into a $1.2 billion deficit-reduction agreement. Instead, it seems to have become a supercolliding committee, focusing the two parties down into a narrower space so that the impact blasts everything into tiny subatomic particles."

That's because the two parties can't abandon the stances of their base voters, the article continues.

"For Democrats to have any chance of making gains in the 2012 elections, they need to demonstrate to their base that they will fight for higher taxes on the wealthy. They can't walk away from the super committee negotiations without a significant tax hike on the very rich. Similarly, it doesn't look like the Republicans can walk away from the super committee negotiations having allowed that to happen - if anything, they need to show they fought for a cut in the top marginal rate. Hence the supercommittee supercollider."

Pulling a victory from failure

Writing for Politico, Manu Raju and Jake Sherman say "both parties are quickly trying to figure out how to turn the committee‚Äôs embarrassing failure into a political win for their side."

Politico quotes senators from each party to show the hard line that exists in the panel.

‚ÄúI‚Äôve heard this from Republicans in the Senate and in the House who say to me, ‚ÄėThe calculation politically has been made by many that they think they‚Äôre going to win the Senate, win the presidency, and they want to wait until next year and just write their own deal,' " Sen. John Kerry (D-Mass.) on NBC‚Äôs ‚ÄúMeet the Press‚ÄĚ said Sunday.

‚ÄúIn Washington, there‚Äôs a group of folks that will not cut a dollar unless we also raise taxes,‚ÄĚ Sen. Jon Kyl (R-Ariz.) said tersely Sunday.

Writing on Time.com, Jay Newton-Small says "looming primaries - both presidential and congressional - have put bipartisan compromise even farther out of reach."

Newton-Small says congressional incumbents, congressional challengers, Democrats and President Barack Obama stand to gain from the super committee's failure.
Here's what he has to say about incumbents:

"If you‚Äôre, say, Senator Jon Tester, a Montana Democrat who has a tough re-election test ahead of him next November, what incentive would you have to vote for entitlement cuts, which would risk the support Native American tribes, seniors, lower income voters - the trifecta of constituents that are pivotal to winning statewide in Montana. On the flip side, if you‚Äôre, say, Rep. Paul Gosar, an Arizona Republican freshman of the Tea Party persuasion, voting for increased revenue could leave you open not just to a primary challenge, but also vulnerable to a conservative Democrat in the general election."

But Newton-Small says there is one big loser in all this, the American people:

"Deficits remain a great threat to national security, as Mike Mullen, former chairman of the Joint Chiefs of Staff, once put it. The committee‚Äôs failure risks a stock market dive amid a widening European crisis and another potential downgrade of America‚Äôs bond rating status. Small business lending could get tougher¬†because of this debacle, the recession could drag out and unemployment could continue to stagnate. There are probably a dozen more winners and losers that I could name on the political spectrum. But the fact of the matter is, whatever short-term political gains anyone gets out of this, in the long run the American people lose."

"China wants to lead the global recovery from the pandemic and become more influential on the world stage than ever‚Ätwitter.com/i/web/status/1‚Ä¶pE
cnni

10:45 am ET January 26, 2021 RETWEET
"It is only a tennis tournament that we're playing and I don't think it should override health protocols and puttin‚Ätwitter.com/i/web/status/1‚Ä¶CG
cnni

10:29 am ET January 26, 2021 RETWEET
New Zealand's borders will remain closed for most of this year as the Covid-19 pandemic rages on, but the country w‚Ätwitter.com/i/web/status/1‚Ä¶Ev
cnni

10:15 am ET January 26, 2021 RETWEET
Increases in air pollution are linked to an increased risk of irreversible sight loss, according to a new study. cnn.it/3qVMa2K
cnni

10:00 am ET January 26, 2021 RETWEET
The race is heating up to produce the first supersonic passenger aircraft to enter commercial service in more than‚Ätwitter.com/i/web/status/1‚Ä¶gg
cnni