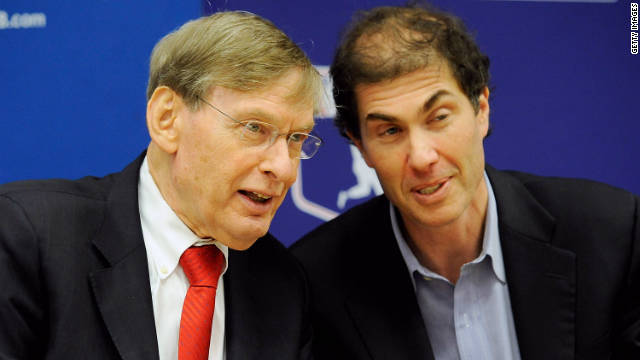 [Updated at 2:56 p.m. ET] Major League Baseball and its players' union announced Tuesday that they have reached a collective bargaining deal - which includes agreement on testing players' blood for human growth hormone - that would last through 2016.

The deal, which players and team owners still need to ratify, also would expand the playoffs from eight teams to 10 by adding┬Āan extra wild-card spot to each league, and it would restrict how and when players and coaches can use smokeless tobacco products.

The playoff changes would happen by 2013, and possibly sooner, with a March 1 deadline┬Āto decide on whether to implement them for 2012.

The agreement, which would succeed the five-year agreement that is set to expire December 11, has the potential to extend baseballŌĆÖs strike- and lockout-free streak to 21 years.

"Nobody back in the '70s, '80s and early '90s ... would ever believe that we would have 21 years of labor peace. ItŌĆÖs really remarkable," MLB Commissioner Bud Selig said at a news conference Tuesday in New York.

Starting with the 2012-2013 off-season, players will be subject to random off-season human growth hormone testing. MLB and the Major League Baseball Players Association will study the possibility of expanding blood testing to in-season,┬Āthe outline said.

Other features of the agreement, according to the outline:

- Players, managers and coaches would be banned from using smokeless tobacco during televised interviews and club appearances. Also, the same people would have to conceal tobacco products, including packages and tins, during games or any other time fans are permitted in a ballpark. When concealing, they may not carry the products in their uniforms or on their bodies. ŌĆ£The parties also agreed upon an extensive program of education and public outreach regarding the dangers of smokeless tobacco,ŌĆØ the outline says.

- The deal confirms that the Houston Astros will move from the National League to the American League in 2013. Last week, the league had said the switch would happen as soon as 2013.

- Starting in 2013, interleague games will happen throughout the season, rather than during segments of the season.

- By 2013, all Major League players will wear a new batting helmet, developed by Rawlings, designed to protect against pitches thrown at 100 mph.