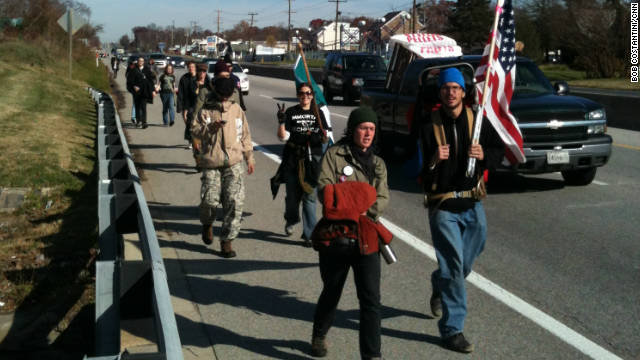 On the road with ‘Occupy the Highway’

Owen Johnson’s feet are hurting, blistered and torn up. The 23-year-old from Vermont has been walking barefoot along U.S. 40, part of the “Occupy the Highway” trek between New York City’s Zuccotti Park and Washington.

Johnson and traveling buddy Elliot Hartman-Russell pause to rest near Joppa, Maryland. Johnson lies in the grass, elevating his feet occasionally, while Hartman-Russell reclines on a guardrail.

“New York was getting … a little monotonous for me,” Hartman-Russell tells CNN Radio. “And I’ve never really been out on the road. It was very appealing.”

The two are part of a contingent of three dozen or so who set out from New York on November 9, just before police temporarily cleared the park and made protesters get rid of their encampments.

Hartman-Russell says if he’d been there for the raids, he would have stayed to show solidarity with the Occupy Wall Street protesters. A native of Northampton, Massachusetts, he decided that going to college this fall was not for him.

“I’d like to study political science … or zoology,” he laughs. “Isn’t that the same thing?”

There is a political goal to the march, heading toward Baltimore and eventually Washington to meet up with protesters there. The Occupy the Highway walkers carry almost no signs, and a few flags, but passing drivers seem to know what the group is doing. They are taking the spirit of the mother ship of the protests on the road.

“I don’t think the political process serves us at the moment,” Hartman-Russell says.

As to why Johnson is tormenting his feet so, it’s just a matter of “getting back to the land.”

They’ve picked up some marchers along the way. Nydia Manos of Bel Air, Maryland, has a job but joined for a couple of days because she likes “the sort of grass-roots concept of trying to fix the system that’s broken.”

She grasps at finding what the Occupy movement is all about. “I feel like a lot of people in my generation have this idea that there’s some kind of really big, bad thing happening, and we’re not really sure how to fix it, but we need to draw attention to it,” she said.

Some drivers honk their support. One shouts, “Get a job!”

The group even has its own “mic check” moments to pass along information based on what lies ahead. The march changed course several times to avoid perceived right-wing strongholds in rural towns.

The goal was to get to Washington just as a congressional super committee was to make its recommendations on deficit reduction. But the committee threw in the towel Monday, unable to come to a deal.

The group will hang out with Occupy DC, as planned. Then, who knows where their feet will take them.