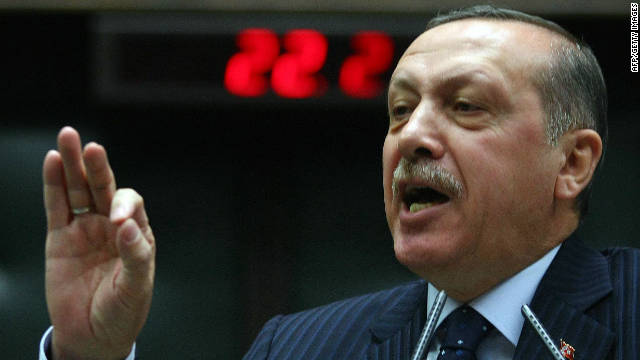 Turkish Prime Minister Recep Tayyip Erdogan issued a stern warning to Syria's president Tuesday, saying that he risks facing the same fate as Libya's slain Moammar Gadhafi if he does not step down.

Erdogan condemned President Bashar al-Assad for remarks he reportedly made over the weekend that he would fight to the death to resist foreign forces, saying al-Assad was battling his own people.

"For God's sake, who are you fighting against?" Erdogan said, in remarks to party members in the Turkish capital, Ankara.

"To fight against your own people 'til you die is not heroism; it is cowardice. If you want to see someone who has fought until death against his own people, just look at Nazi Germany, just look at Hitler, at Mussolini, at Nicolae Ceausescu in Romania.

"If you cannot draw any lessons from these, then look at the Libyan leader who pointed weapons against his own people, used the same terms you use and who was killed just 32 days ago in a way that none of us wished."