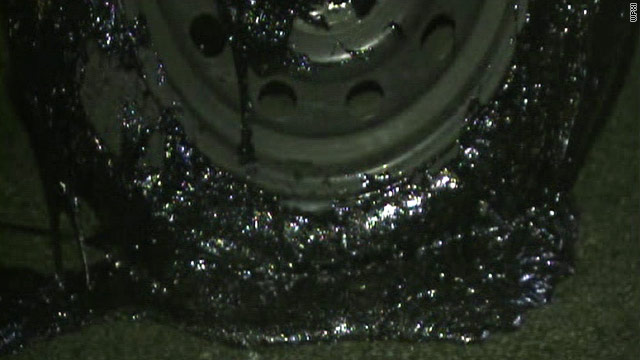 The black good affected hundreds of cars on the Pennsylvania Turnpike.
November 23rd, 2011
10:10 AM ET

If you hear about a sticky Thanksgiving travel mess, images of crowded airport security lines and jammed freeway interchanges probably come to mind. Your car sitting on the freeway in a mass of a black goo probably isn't what you think of.

But that's exactly what drivers on the Pennsylvania Turnpike faced Tuesday night after a tanker truck carrying driveway sealant sprang a leak and spread the goo over a 37-mile stretch of highway.

"This is Thanksgiving. Now we have to turn around and go back home," Laura Frick, who was traveling from Cleveland to New Jersey for the holiday, told CNN affiliate WTAE-TV in Pittsburgh. "It's horrible."

About 200 vehicles were damaged by the sealant, some to the point that they could no longer move, according to a report in the Pittsburgh Post-Gazette. Some drivers said the numbers were even higher.

"Our car is disabled, along with about 300 others," Ken Miller, of Dearborn Heights, Michigan, told the Pittsburgh Tribune-Review. "Our (sport utility vehicle) is wobbling like I'm driving on four flat tires."

"We got on the turnpike and we noticed all these cars pulled over and our car was driving rough, and it was like it was going in to a flat," Lynn Snitzer told WTAE.

"I began hearing something rough hitting under me. I pulled off to the side of the road with about 20 other cars. Everybody thought they had flat tires. Then I reached under my wheel well and saw black stuff all over my hand. It was literally running down the sidewall and puddling on the ground," driver Tom Jungling of Hampton, Pennsylvania, told the Tribune-Review.
Repairs will likely be costly, tow truck driver Tony Armenti told WTAE.

The mess was a headache for highway crews, too.

"Initially, they were literally trying to plow this material off the roadway, and they did that to a point, but most recently they've moved to just putting down sand," WTAE quoted turnpike spokesman Bill Capone as saying.

Capone said affected motorists could contact the turnpike commission for help with insurance claims, according to the media reports.