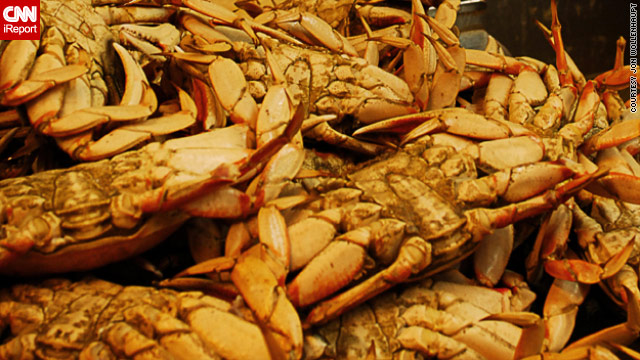 Californians not getting their Thanksgiving crabs

A couple of turkeys got a Thanksgiving pardon from President Obama at the White House on Wednesday, but beneath the Pacific Ocean, thousands and thousands of crabs will be around for a holiday they normally experience from a pot and a plate.

Dungeness crab have traditionally been served on Northern California tables along with the turkey and trimmings for Thanksgiving. This year, however, a price dispute between crab fishermen and processors has left market shelves and restaurant menus bereft of the crustaceans, according to media reports from the Bay Area.

Crab fishermen want $2.50 a pound for their catch, but processors are offering only $2, so the fishermen are staying in port, and traps aren't going into the sea, the San Francisco Chronicle reports.

"I feel terrible, because I know everyone loves Thanksgiving crab, but we can't work for nothing," Larry Collins, head of the San Francisco Crab Boat Owners Association, told the Chronicle.

"We're pretty united on this. We can't go unless we all go," he said of the 150 or so crab fishermen on the Northern California coast, according to the Chronicle.

"We are hearing nothing but stories about how this is throwing a monkey wrench into Thanksgiving Day plans. Usually, these disputes last a day or two, but not this long,"Â Keith Fraser, co-owner of Loch Lomond Marina in San Rafael, told the Marin Independent Journal.

"We have hundreds of people asking for crab, and we are disappointing them all," Fraser is quoted as saying.

Fishermen were paid $1.75 a pound last year, according to the Chronicle, but say they need $2.50 this year due to rising costs for fuel, traps and bait.

Joe Cincotto, regional general manager for Pacific Fresh Seafood, told the Marin paper that processors face higher costs, too, and he had little sympathy for the plight of the fishermen.

So while the argument continues, most consumers do without.

"They're surprised because it's the first time that we don't have crab for Thanksgiving week," Herson Sariles, seafood team leader at Whole Foods in Monterey, told the Herald of Monterey County. "Actually, besides turkey and pies, for that week I would say it's the third item that people are looking for."

While most shoppers will have to do without Dungeness, customers of the Sea Harvest markets may get lucky.

Owner Lynn Platt told The Herald that the family fishing business run by her brother Richard Deyerle has a few boats in the water and is getting some small supplies to the Sea Harvest markets.

But while Deyerle is happy for his business, he feels for the community as a whole.

"It's awful. There's no volume, so it just creates ill feelings with everyone. We have crabs. That's great. But I don't want bad feelings with people. It's a tricky situation," The Herald quotes him as saying.

House Democrats pick Hakeem Jeffries of New York to succeed Nancy Pelosi as leader of the Democrats in the chamberâ€twitter.com/i/web/status/1â€¦RP
cnnbrk

11:36 am ET November 30, 2022 RETWEET
An explosion occurred at Ukraine's embassy in Madrid, injuring at least one person, the Spanish Interior Ministry sâ€twitter.com/i/web/status/1â€¦b9
cnnbrk

8:34 am ET November 30, 2022 RETWEET
Jiang Zemin, former Chinese leader who presided over a period of unprecedented economic growth, has died at 96, staâ€twitter.com/i/web/status/1â€¦7u
cnnbrk