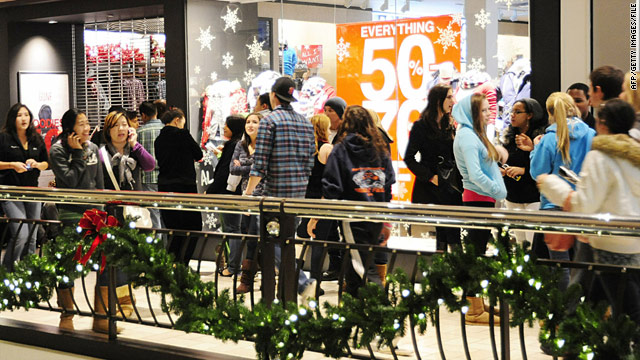 The Occupy Wall Street movement's plans for an upcoming mass demonstration, targeting major retailers on Black Friday, has lots of readers seeing red going into the Turkey Day weekend. Some scoffed at the danger involved with getting in between hyped-up shoppers and their prize, and others thought the movement's goals were misguided. Few spoke in support of the Occupy protesters.

"No doubt this movement will cause someone's death, making it a true black Friday," said Tralfaz. "Don't mess with shoppers looking for bargains. They have nothing to do with the people you are against and most of the ones I know would kill you to get 50% off. Your movement is about to lose all of its power and turn the masses against you."

WorkingGuyNYC was among those who said trying to harm businesses could harm citizens.

"So you want to disrupt Black Friday because companies are slashing prices (taking away from their profits), which benefits the 99%. What a way to lose public support. I'm guessing none of the protesters have been to a Black Friday sale. Just try blocking a mother on a mission for a 50% off Xbox. Hope they have medical."

NeverQuit: "The target should be companies that purchase politicians, and therefore the focus should be on those companies, big or small, that disproportionately contribute corporate money to influence political outcomes. Targeting ALL publicly traded companies doesn't make sense: there are still many "good citizen" corporations that play fair, pay a decent wage and don't seek to corrupt our political system."

It was difficult to find people supporting Occupy Wall Street among the comments, which were predominantly opposed, but we did find a note from Jackie.

Matt explained to another commenter (with the same name) that the "system has been gamed to only work for the 1%." Definitely a heated discussion here.

"If the 99% don't work their hours, take the money they want to pay, buy their products, follow their rules ... then everyone loses ... it's all a sham and it's time for you to wake up and fight back! The 1% has been waging class warfare for 30 years ... no more."

Oh, and if you're out on Black Friday and happen to see any of this going on, contribute your perspective to the Occupy Wall Street open story.

Food uncertainty, or wondering about where the next meal will come from, is a problem that affected 14.5% of households in the United States in 2010, according to data from the U.S. Department of Agriculture. That amounts to 17.2 million people.

"No one should ever go hungry in America," said geoplato. "The very fact that is happening means the system is not working." NorthernPike suggested learning to stretch dollars.

"When I was in college, my friends would be complaining about food prices and living off mac and cheese. Meanwhile I was making a 5 gallon pot of chicken and dumplings to last me a week for about 10 dollars. When you know how to cook, it makes a big difference on the food spending.

There were some that wondered why the children were going hungry, or if parents are responsible. JNC0704 noted, "They can't afford food, yet every member of the family most likely has a smart phone. If people would only buy what they need and not what they want, the 'poverty rate' would be cut in half." And many commenters also said it doesn't matter.

bobb1957: Regardless of their circumstances, NO CHILD ON THIS PLANET DESERVES TO GO HUNGRY. Today I will go out and find a family in need and I will invite them to share Thanksgiving with my adult children and I. I'll try to get to know them so that I can share all I am thankful for with them until they can fend for themselves. I challenge each of you to do something besides sit at your PC and pass on your opinions."

We heard from lots of commenters about the passing of CNN Radio's Stan Case. Some wanted to offer their condolences or share a memory of him. Among them:

MWR1172: "Stan was a law school classmate of mine at Georgia State, and a really good guy. My condolences on his passing. May his memory be a blessing to all his loved ones, and I wish his wife a speedy recovery."

CaptainJack1: "Condolences to Stan and his family. I wish everyone a safe and Happy Thanksgiving. Let Stan's tragic death serve as a reminder to everyone to be careful out there."

heathey2: "Rest in peace Stan Case and get well soon Angela Case. It's terrible and unbearable to lose a loved one any time of the year, nevermind during the time of year when most American families meet up and spend that special time together."

Thanks for your touching feedback, everyone.

4. The woman who made riding dragons possible

Readers were also mourning the death of author Anne McCaffrey, 85, who brought us the beloved Pern series and brought fantasy worlds to life. There were some very lovely tributes penned by the commenters on this post.

Lea Jones: "Anne's books saw me through a difficult adolescence. I will be forever grateful to her for not only providing me with many exciting refuges to hide in, but for providing my mother and I a way to further our bond as adults. Thank you Anne. You will be sorely missed. The dragons are keening their deathsong for you."

menolly: "So sad, she was truly a gifted author. When my wife was pregnant with our first child we both read one of her early books. When it came time to name her, we chose the name of our favorite Pern character, Menolly. While, in hindsight, we probably didn't do our daughter a favor ('how do you spell/pronounce that?'), but that's the passion we had for Anne's novels."

Nancy: "I was privileged to meet Anne at WorldCon in Winnipeg in 1994. She was the main reason I went. She was funny and fun, smart, articulate and understood her fans. She pointed me out of the audience and asked me to help her up a set of stairs that was given her trouble. She didn't even know me! But she knew everyone there loved her and she loved us in return. May the dragons watch over you, dear Dragonlady. You will be missed."

Our friends at Eatocracy call this dish the "turducken of the sides world," featuring mashed potatoes swaddled in stuffing (or dressing) in a special fried preparation that is then dipped in cranberry sauce. We kind of feel like Jason does:

"This article made me laugh, made me cry, made me get a serious hankering for corn whiskey (which may or may not be legally manufactured). This was well-written, hilarious, and informative (I found out that, for some reason, Twitter's become unblocked on my work computer!! THANK YOU!!)! I will definitely be trying this recipe of happiness and Lipitor's job security!"

Now, if it wasn't for the debate over the health consequences of deep-frying, as well as specific techniques. The more you know ...

Leaf on the Wind: "This almost made want to go out and buy a deep fryer. Almost. If it weren't for the fact that I could hear my arteries hardening. Sure looks yummy, though, and who cares about healthy eating over the holidays, right?"

oubie: "There are several posters who are misinformed as to the health issues with correct deep frying. First, it is true that deep frying is never healthier than other forms of cooking, but the bad effects can be mitigated by proper frying techniques. First, fry in Omega-3 rich Canola oil, not vegetable oil. It has a higher smoke point as well, which is important because you really want to fry potatoes at 360 degrees to 380 degrees, not 325. Use a thermometer in the pan to make sure you adjust the heat to keep the oil at the right temperature. Do not overcrowd the pan and try to have the foods you fry at room temperature when you put them in the oil. That will also keep the temperature from dropping too low. When cooked properly, deep fried foods will absorb no more oil than shallow-frying food."

What's your take? Join the conversation below and in the latest stories on CNN.com. Or sound off on video via CNN iReport. If you've witnessed an Occupy Wall Street protest, share your perspective on the open story.