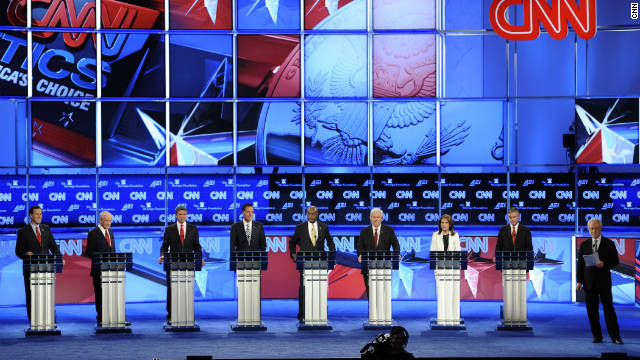 Editor's note: This post is part of the "Overheard on CNN.com" series, a regular feature that examines interesting comments and thought-provoking conversations posted by the community. Share your debate reaction on CNN iReport and in the comments area below.

Several key divergence points between the GOP candidates emerged Tuesday night during the CNN-sponsored national security and foreign policy debate. The debate was spirited, but who can you believe? That's a question both CNN analysts and our own readers have been trying to answer.

Who can you believe at GOP debates?

Debate coach Todd Graham once again evaluated the candidates in this opinion piece that evaluates the debate. Commenters and iReporters responded with some interesting critiques of some of the candidates.

Many analysts said Newt Gingrich gave a strong performance, with nuanced arguments and confident defenses of potentially unpopular positions on spending and illegal immigration, but commenters seemed a bit ambivalent about him.

joeinalabama: Newt has a lot of baggage, but I think he has a better grasp of how the world works than the rest of them, including Barack Obama.

TxJim: "Newt makes so much sense. Over and over and over again. Very smart man. Just completely devoid of any credibility and totally unelectable."

thestocks: "Newt is a very smart man. I think he has too many skeletons in his closet, and too many instances in his past when he supported the liberal spending policies of George W. Bush."

Ron Paul, on the other hand, advocated a libertarian stance that set him apart from the GOP candidates, analysts say. Paul is known for having a very devoted following, particularly online (the CNN.com comments section is no exception), and several readers wrote to share their support of him.

firehawktt: "I was impressed with Ron Paul in this debate. The U.S. should not be the world police. We should not interfere in every foreign conflict out there. Here you had the other candidates attacking Obama for not putting a no fly zone in Syria or Iran. We're already in Iraq, Afghanistan, and Libya, and these guys want us to get involved in more wars?"

columbridae: "As much as I hate to admit it, Ron Paul came off as very intelligent last night. He still has unrealistic ideas, but he knows his facts. ... I don't think his extreme liberty policies can survive when there is so much corruption and greed; they would be good ideas if businesses could be trusted to not do bad things."

In the article, Graham talks about making deposits in a credibility bank that can't get stretched too thin, just like your finances. He says Jon Huntsman made comments that added to his credibility, and he also says Mitt Romney managed to gain the edge over Rick Perry in a discussion about U.S. policy with Syria. Our commenters liked Huntsman in many of their discussions and were ambivalent about Romney in some cases. Take this comment exchange:

Sphy: "Huntsman won on credibility by a landslide. Romney just oozes insincerity. You can tell he's pandering to Republicans and doesn't believe half the positions he seems to be selling."

But if you think that you can escape from the three-ring electoral circus by moving to some other country, you might want to think again.

ejr1953: You really can't believe any of them. Politics in America is the game of the politician figuring out what most people want to hear, feeding their pre-conceived notions about how things should be in the world, making statements to get more people to vote for them vs. the other candidates.

Roscoe55: Not just in America my friend, things are just the same here in the UK. Politicians get elected on one set of promises and forget all about them once they get in power.

Join the conversation about the debate in the comments area below and in the latest stories on CNN.com. Or share your opinion on video via CNN iReport.