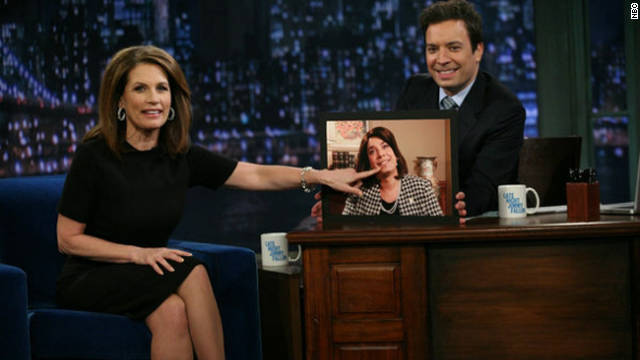 NBC apologizes to Bachmann over song

Fallon had apologized on Twitter after Bachmann appeared Monday on his "Late Night with Jimmy Fallon" show, walking on stage to the song "Lyin' Ass Bitch" by Fishbone.

"I'm honored that @michelebachmann was on our show yesterday and I'm so sorry about the intro mess. I really hope she comes back," Fallon tweeted on Tuesday.

The candidate admitted being oblivious to the slight at the time, but insisted in an interview Wednesday on Fox News that the incident amounted to "sexism."

The network did so, according to the "TODAY" show report on Thanksgiving Day.

It appears the song choice was intentional. Prior to Bachmann's arrival on stage, the band's drummer, Questlove, tweeted during the show: "Aight late night walkon song devotees: you love it when we snark: this next one takes the cake. ask around cause i aint tweeting title."

On Tuesday, the Fallon show's band issued a statement saying "the performance was a tongue-in-cheek and spur-of-the-moment decision."

7:45 am ET October 24, 2021 RETWEET
This Ukrainian airline company has decided to put an end to heels and pencil skirts after collecting feedback fromâ€twitter.com/i/web/status/1â€¦Vh
cnni