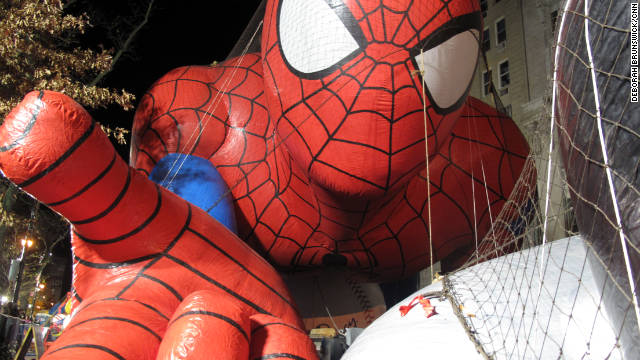 A tangled web of hoses covered the streets around the Museum of Natural History in New York as 15 giant helium balloons were inflated late Wednesday afternoon. They're the premier attraction in the 85th annual Macy's Thanksgiving Day Parade, which is expected to draw hundreds of thousands of people to the route as the holiday season is ushered in.

Crews were extra careful to ensure that the balloons were well secured as wind gusts and the occasional light rain shower pushed them around. But the wind is expected to die down by morning, and Macy's officials do not anticipate any problems flying the balloons in the parade.

"Everyone has seen this parade. You've grown up with it," said Jimmy Artle, a member of the production team. This is the 31st straight year that he's worked on the parade. "The parade has been here long before me. It's going to go on long after I'm gone. It's like being a caretaker. It's an amazing feeling."

About five new balloons will be featured, including Julius, the Paul Frank monkey. And a balloon making its return after an 18-year absence will be Sonic the Hedgehog. Eleven marching bands, dozens of floats and hundreds of clowns will join them as they make their way to Herald Square, the site of Macy's flagship store.

"I've never seen anyone come through here watching us inflate these balloons without a smile on their face," Artle said. "It's just something that warms your heart."

The domestication of horses changed the course of human history, but scientists have tried to figure out when and wâ€twitter.com/i/web/status/1â€¦y4
cnni

6:04 pm ET October 22, 2021 RETWEET
Forests have long been celebrated as the natural heroes in the fight against the climate crisis. But while we areâ€twitter.com/i/web/status/1â€¦CE
cnni