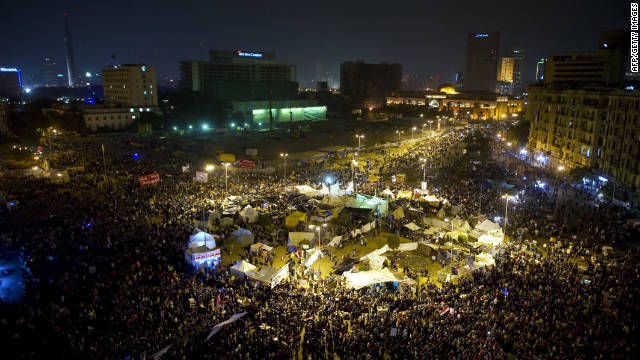 The Reads You Need: Protests in Egypt

Editor's note: Each day, we'll bring you some of the diverse voices from our site and across the Web on the stories causing ripples throughout the news sphere.

[Updated at 8:51 a.m. ET Friday] Cairo has seen days of protests and violence as demonstrators voice opposition to what they perceive as Egypt's too-slow transition from military rule. Parliamentary elections are due to begin Monday - part of a long electoral process that may lead to a presidential election months from now - but demonstrators have been upset with the transition's pace and are demanding that the military rulers step down.

A military council took charge of Egypt after protesters ousted President Hosni Mubarak in February. The military promised that eventually a civilian government would be elected and take over. But demonstrators say they are concerned that the military, which would continue to be Egypt's top authority until a president is in place, wants to keep a grip on the country. Many also have voiced anger about a proposed constitutional principle that would shield the military's budget from scrutiny by civilian powers.

Relative calm prevailed Thursday over Cairo's Tahrir Square, where protesters have been since Saturday, but Friday brought more plans for street activity. And clashes in the country between demonstrators and security forces killed 38 people by Wednesday, including 33 in Cairo; another 3,250 were wounded, the country's health ministry said.

Today, we'll take a look at what some commentators are saying about Egypt's future, the United States' leverage in the region, and why, if history is any lesson, a slow transition from military rule shouldn't be a surprise.

Why Egypt needs a second revolution

Emad El-Din Shahin, associate professor of religion, conflict and peacebuilding at the Kroc Institute for International Peace Studies at the University of Notre Dame, says that since it took control of the post-Mubarak transition, the military "has been following a three-sided strategy to contain and even frustrate the persistent demands for handing over power to a civilian authority and establishing an effective democratic system."

"To many protesters, what Egypt is witnessing is "phase two" of the January revolution. One cannot ignore the striking similarities between the two phases, particularly the snail-paced responses of the military council and Mubarak and the unjustifiable use of force against unarmed civilians.

The military council also repeats another fatal mistake by responding too late with too little, leading protesters to raise the ceiling of their demands. What started as protests calling for protecting democracy and a timetable for transferring power under the management of the military council has become firm demands for ending the rule of the council and the military generals.

Despite this revolutionary situation, and perhaps because of it, Egypt has great hopes in transitioning to democracy. Several steps need to be taken.

The military council needs to bring to justice those responsible for the death and injury of peaceful protesters, including the immediate dismissal of the minister of interior and his aides. A new national salvation government has to be formed of credible public figures to manage the transitional process - writing a new constitution, restoring order and reviving the country's economy.

Tony Karon, a Time magazine senior editor who has covered conflicts in the Middle East, Asia and the Balkans, writes that when Mubarak was ousted, the United States welcomed the temporary passing of Egypt's executive power to the military. He says recent developments have provided what some call "a dilemma for the Obama administration, once again forcing it to choose between authoritarian stability in the form of the junta over the uncertainty of democracy."

But regardless of what the U.S. government wants, decades of support for Egypt's dictators "has left little enthusiasm across its political spectrum for U.S. involvement in shaping the country's future," he writes.

"Two weeks ago, of (the Obama administration's) own advisers on the bipartisan Working Group on Egypt had even urged the Administration to pressure the generals to make good on a democratic transition, conditioning U.S. military aid to Egypt on the military accepting its withdrawal from political life and subordination to an elected civilian government.

But if the U.S. once again finds itself anxiously wringing its hands in the face of a rapidly-changing political situation in Egypt, the abiding lesson of 2011 has been just how limited U.S. leverage and influence has become across Middle East. The proposals, entreaties and threats by the Obama Administration are now routinely ignored by friend and foe alike — Saudi Arabia orchestrated a brutal crackdown on Bahrain's democracy movement when the U.S. was urging dialogue; Iraq said thanks but no thanks to U.S. troops staying on beyond December; Israel kept on building settlements, while the Palestinians ignored Obama's frantic efforts to stop them taking their case to the U.N.; Iran ignored U.S.-led pressure over its nuclear program; Syria's President Bashar al-Assad has ignored Washington's demand that he step down; Turkey has been unmoved by Obama's efforts to cajole it into reconciliation with Israel; and so on."

CNN's Fareed Zakaria, writing on the Global Public Square blog, says that the Egyptian military military needs to understand that "the cost of trying to hold on to all its perks is that Egypt will become a deformed, malfunctioning democracy." It faces two choices, he says:

"It can go down the path of Turkey, where the military’s privileged position has been reduced and placed under constitutional constraints and democratic, civilian government. Or Egypt can follow Pakistan, where the military exists as a law unto itself controlling vast swathes of the economy.

It is pretty clear which is a healthier society. Turkey is a booming, democratic country that has become one of the great growth stories of the world. Pakistan is a completely dysfunctional basket case that survives only because it gets aid from the United States (and that aid is largely given for fear for what would happen if Pakistan collapsed)."

On Al Jazeera's website, Adeel Malik, a development economics instructor at the University of Oxford, and Ty McCormick, a freelance journalist and Clarendon Scholar at Oxford, write that the old guard in Egypt is still in a position to reassert itself, and that history teaches that even when radical change seems to be happening, "institutional persistence is often the norm, rather than an exception."

"The spectre of revolution was imminent. Rising food prices, unemployment and dissatisfaction with corrupt authoritarian regimes had all reached a boiling point, and within months the upheaval had shaken all corners of the continent. The year was 1848 and the countries in revolt were France, Italy, Austria, Bohemia, Hungary and the German states as well as a half dozen others that had not blossomed into full-fledged revolution. But after a few symbolic victories – Louis Philippe abdicated in France; Hungary achieved momentary independence from Austria – the uprisings were quashed and the old order resurrected once again. In the words of historian Peter Stearns, "the revolutions of 1848 were short and very nearly stillborn."

And so too with many of the revolutions of 2011: Saudi Arabian troops crushed the democratic uprising in Bahrain, Yemen's bid to unseat President Ali Abdullah Saleh quickly descended into chaos and President Bashar al-Assad continues to put down protests in Syria with a force rivalled only by his father, the late Hafez al-Assad. Meanwhile, the execution-style killing of Colonel Gaddafi in Libya marked both the end of an old order and the beginning of a new one that is already characterised by familiar patterns of violence. Only Tunisia seems geared for an orderly transition.

But the revolution that has left the Old Guard in the best position to reassert itself – and upon which the success or failure of the revolutions of 2011 may well be judged – is Egypt's January 25 uprising. On November 28, Egyptians are scheduled to cast their ballots in the first of three rounds of voting to determine the post-revolution parliament. What they will not do is vote in a parliament that has the power to do much of anything. Repression from state security services has returned with a vengeance. A pall of gloom has already set over Egypt in the face of running battles between protesters and the military police that has left at least 33 people dead since last week. In Egypt, the more things change, the more they stay the same.

The SCAF's growing assertiveness has irked many activists, who are already lamenting a revolution lost in transition. But, to any observer of history, this doesn't come as a surprise. Institutional change, as the failed revolutionaries of 1848 might have certified, tends to be incremental in nature. In fact, institutional persistence is often the norm, rather than an exception. History is replete with examples where seemingly radical institutional changes have turned out to be moments of transition, rather than moments of transformation. Indeed, neither the abolition of slavery in the United States nor the end of Apartheid in South Africa immediately broke the back of status quo. Elites have a remarkable tendency to endure, even in the face of radical reform. No surprise, then, revolutions can signal greater continuity than change.