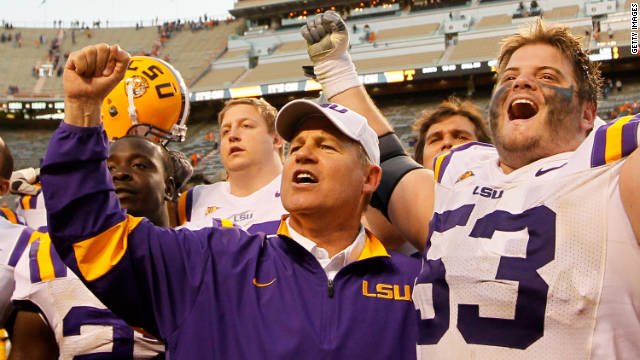 Coach Les Miles and his LSU Tigers will likely be a shoo-in for the BCS title game, providing the team beats Arkansas on Friday.
November 25th, 2011
10:23 AM ET

For college football, mess of a BCS in the works

The chase for the college football crown has come to this fateful weekend. And the BCS – that would be the Bedlam, Controversy and Squabbling – has never been messier.

Friday’s LSU-Arkansas game may all but decide 50% of the national championship, but the variables, plots and subplots that make the case for other title contenders are as interwoven as the laces on a football.

Let’s start with the easy stuff: LSU will likely be a shoo-in for the BCS title game, providing it beats a loose-playing, freewheeling Arkansas team that isn’t afraid to play like, well, wild hogs.

And they’ve sort of owned LSU recently, winning three of the last four games, including a memorable three-overtime, 50-48 victory over the then-No. 1 ranked Tigers in 2007. Interestingly, that two-loss LSU team still got the nod to compete for the national title, where it beat Ohio State.

Sports blogger J. Danielle at playerperspective.com  said the Tigers may even be able to play for the national championship with a loss, considering that they will have faced an unprecedented eight top 10 teams (SEC East champion Georgia will likely make the top 10 after this weekend), including suspensions for key players at one time or another.

“I think this LSU team could potentially be considered as having one of the best runs in college football history,” she said. “Obviously Alabama is LSU’s most likely opponent right now.”

But what about Oklahoma State? Where is Boise State in this thing? And Houston, we’ve got a problem.

In Bowl Championship Series theory, the algorithms calculated by the computers should be offset by the principled judgment of human pollsters (sports writers, coaches) who challenge themselves in selecting the two best teams. The problem comes when the computers run the numbers against the nuances that humans see when the games are played: Like Alabama had no business being locked in a 6-6 tie with LSU at the end of regulation on November 5 (still kicking themselves?) and therefore should stay ranked ahead of other one-loss teams. Like how Texas A&M has had six losses by a total of 17 points and led in the fourth quarter in most of them.  Or Ohio State who, after an early 24-6 drubbing by Miami, lost four games by a touchdown or less despite adjusting to offseason controversy which led to the dismissal of their coach and quarterback. And we all know what 9-2 Penn State has been through. Nuances.

And Houston’s problem? Poll voters don’t respect their competition, mainly Conference USA. At 53 points per game, the 11-0 Cougars have one of the most potent offenses, not only of the season but this century. If they win, they’ll get an automatic bid to a BCS bowl game, but not a shot at the championship.

No. 4-ranked Oklahoma State, a team that has scored at least 60 points three times this season, has one loss, in an overtime game in which it committed five turnovers. It must take care of business against a wounded but proud Oklahoma squad ranked No. 9 in the country.

No. 3-ranked Arkansas has BCS title game dreams, as well, but it must beat the Bengal Tigers in Baton Rouge, whip Georgia in the SEC title game and hope Alabama gets upended in the Iron Bowl. Even if all that happens, Arkansas would need help, but that’s where being in the mighty SEC would come into play.

To add to the pressure, Friday is Senior Day for LSU. Using his particular brand of phrasing, Coach Les Miles stressed to reporters this week that his team understands the need to finish strong.

"I promise you they will be playing a very impassioned game in their last event in Tiger Stadium,” Miles told the Baton Rouge Advocate newspaper. “I can imagine the emotions that will run through them. I will also encourage them to understand that they need to put them away because they are facing a game with its own impact.”

Also with a horse in the race is the 10-1 Oklahoma State Cowboys, which could get in if LSU loses by enough points (thanks, computers) or if Alabama loses at all.

If Oklahoma State makes it to the BCS title it would be the first appearance by the Big 12 since after the 2009 season (Texas).

The 9-1 Boise State Broncos are still alive, as they should be. Their one loss? A one-point defeat to TCU. One point! Even then the Broncos would have to nearly walk on water to play for the national championship, despite a quality win against Georgia.

And now for the elephant in the room: Alabama.

It’s going to be awfully hard for the Crimson Tide to not secure at the very worst the No. 2 seed with a decent win against Auburn on Saturday in the Iron Bowl. The computers already have the Tide juiced up with enough points so that if the Tide survives Auburn they will be playing for their second national title in three years.

There will only be one problem: Alabama may not be its conference champion, a major sticking point from years past (cue the one-loss Virginia Tech and Stanford Cardinal).

If Alabama beats Auburn in the Iron Bowl, they can make the same argument LSU made back in 2006, which is that it is “undefeated in regulation,” losing only to the No. 1 team in overtime by three points.

Did I mention the BCS was a mess already?

In football, they say it’s not whether you win or lose, but how you play the game. But for the BCS, it may be how you see it, as well.