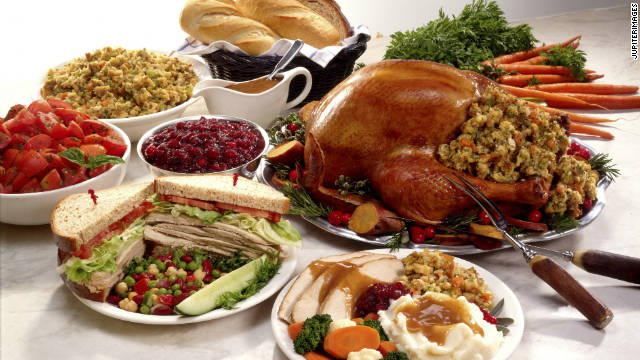 This year’s Thanksgiving holiday has come and gone, but the food, for many, hasn’t. Half a turkey, mounds of potatoes and bowls of gravy are sitting in fridges all over the United States just waiting to get freaky with a foodie.

Tom said, “Hey, I just bought a pre-cooked turkey breast from Publix so I could have nothing but leftovers. Every last bit has become turkey sandwiches so far (but I may be starting to get tired of turkey sandwiches."

Brian said, “I'm making a stock out of turkey carcass.”

Tim said, “Sandwiches...both hot with gravy or cold with cranberry...soup, or something akin to stew with everything thrown into a pot. Thanksgiving is terrific, but the after Thanksgiving leftovers officially kick off the Christmas season. It doesn't get any better than this!”

Ed said, “Hot or cold, as-is or as sandwiches, are all really good to me. My favorite thing to do with the leftover turkey is to boil the carcass and make homemade turkey noodle soup. A bit of a pain I'll admit but it beats anything you'll find in a can by far!”

Will said, “I prefer foods like potatoes or green beans warm. We make enough for a serving on Thanksgiving and one more meal later on. The main challenge is turkey – I can't stand the amount of room it takes up in the fridge and don't want it getting bad in there and ruining other foods. The trick is to slice it up, package into storage containers, and not buying a bird that is so large we have to eat it five days in a row.”

Michelle said, “I usually get a large turkey and use the leftovers in anything that would normally require chicken. I can't wait to make turkey enchiladas tomorrow!”

Martini said, “Forty years of cooking turkeys did us in. No more turkeys. It's chicken from here on in. Enough with the gobblers. We're still good with the cornbread dressing, cranberry goo and sweet potato casserole. Anymore we're cooking with one goal in mind....leftovers. Hot or cold.”

Many college football fans have long been frustrated by the BCS selection system that chooses which teams will play in the major bowls. And with losses from every top ranked team except LSU (prior to today’s game against Arkansas), things have gotten particularly complicated this year. If LSU loses today, every top team will have a loss and the arguments about which team should be in which bowl will begin.

TallinOK said, “The BCS is a joke. At the beginning of each season, large Division 1 schools flat out stomp smaller schools and run up the scores for BCS points. If you don't believe me, look at the scores of the major Division 1 schools. My alma mater (about 8,000 students) got the privilege of playing three top 10 schools in their first four games. The scores were obscene. I think the BCS is not only a joke, but is obscene when it rates by computer these kind of pairings.”

Matt said, “I'd like to hear more about the anti-trust suit brought against the BCS. This whole system is ridiculous and needs to be replaced with a playoff system.”

Smooth responded, “College already has a playoff. It just starts the first game of the season.”

drp146 said, “The BCS is a joke. No chance of a Cinderella story. It's rigged to a certain extent to favor the large schools and conferences.”

Raymond Peters said, “Let's face it. As long as colleges and universities as well as coaches are making big money the BCS will continue to be played as is. It's all about the Benjamin's, gentlemen! Incredibly enough, I don't see why we don't have a playoff season like the NCAA basketball season. Let the best team standing win!”

Brock275 said, “Let's be very clear. Installing an eight-team playoff will only change the NCAA into something very near to the NFL. Is that what we really want? I understand the heartache, particularly if your favorite team is locked out. However, this type of controversy is the unique quality to NCAA football that draws everyone's attention. We want each and every game to be important (unlike NFL when they sometimes sit their second string and throw the game for playoff purposes). With all that said, I think the computer scores are suspect – but they are balanced out somewhat by the human factors.”

bobcat ( in a hat ) responded, “@Brock275 It may not be exactly what we want, but it would be a step in the right direction. There have been a lot better teams eligible to be in these games. But instead, they base it on the opinion of a few people. I never have agreed with that.”