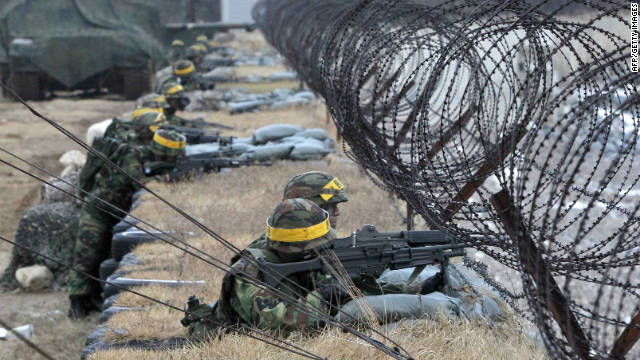 “What a sad situation. They are all Koreans with family on both sides of that once one nation.“ -isallwon

Another round of threats from North Korea came a day after South Korea staged exercises near Yeonpyeong Island, marking the anniversary of the North's deadly shelling that killed two marines and two civilians. In response to the South’s exercises, the North's military threatened "a sea of fire" upon the South's presidential office.

CNN.com readers had plenty to say about the ongoing conflict in the region.

Some readers said the North’s response was predictable.

TheEZD said, “Every so often, North Korea must think ‘Hey, I have not been in the news lately, time to send another warning to the south/world for (rolls dice) military exercises!’”

GODis responded, “Then the following week, they are asking for handouts again to feed their starving people, and then the food, medicine goes straight to the military. Enough is enough, 60 years of this BS. The Generals in the North Korean military don't even talk to each other, they are only concerned with the state of their own little kingdom, within the larger kingdom.”

Mike881j said, “The South sends food and supplies to the North, and the North sends threats back South. One day the world is going to be sick of the constant threats and war mongering by the North and finally stamp out that awful regime.”

LouisSilex said, “Not them again ! I thought China had bought that place or something!"

CNN.com readers debated what China would do if a full-scale war broke out between the two countries.

Brad76 said, “China does NOT want America near China's border. China would more than likely defend North Korea, they've done it once they'll do it again. This is simply not worth the loss of human life, and waging war while financially unstable is not wise. Time to wake up to reality.”

Callahan9119 said, “The North couldn't sustain a war effort for more than a couple weeks. No, food, fuel, parts, infrastructure, communications. They have nothing. If they initiated a war nobody, including China, would help them.”

pbzekeg said, “I agree. China will not surrender all what they have gained in the last 20 years to save North Korean. It the North attack the South the War will be over in less than 4 weeks. I served in Korea in 1958 and 1962 and I can tell you the South is READY.”

Callahan9119 said, “This isn't the 60's, if the North did something big they would cut bait. China is already sick of them. They get something if the North is just belligerent, they gain nothing from a war, in fact they lose. Millions of people would flee into China.”

Other readers simply lamented the threat of war.

tomn8r said, “Too bad we can't all just get along eh? sucks that we have to always spend zillions on weapon systems. money that could be used to make this little rock a complete paradise 4all. nothing we can do about it though – most of us can't even get along with our own family and neigbours to expect us 2 get along with totally different cultures/religions/ etc.

What to do? nothing. There's nothing we can do. We (humans) are programmed to fight. It's in the DNA.”

TheBossSaid responded, “If viruses destroy cells at the microcosm level, what do you expect from higher life forms?”

Do your views align with these commenters' thoughts? Post a comment below, or sound off on video.