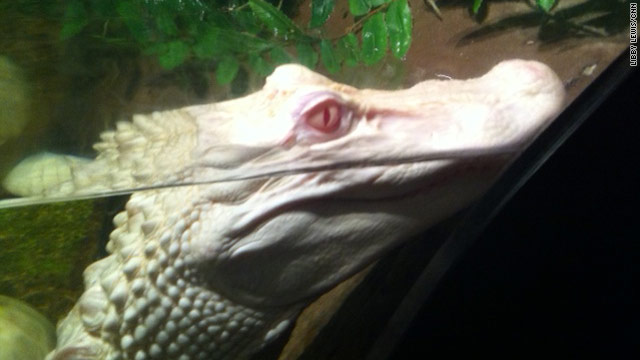 It's as though they’re saying, "Some of these creatures in Washington aren’t following the rules of civilized society. They only seem to care about saving their own skin."

What the polls don’t show is that those creatures aren’t necessarily politicians. Some of them are living in the basement of the U.S. Commerce Department.

Right now, there’s an albino alligator there. On purpose.

It turns out that the National Aquarium – the original one – is in the basement of the U.S. Commerce Department. And it's been there been since 1932.

So upstairs, they’re talking about economic indicators (and maybe presidential candidates who want to make the Commerce Department extinct).

She got here in the fall, when a lot of creatures move to D.C. She’s got pale luminescent skin and mesmerizing eyes that look like pink crystal marbles.

CNN got an exclusive interview with her handler, Ryan Dumas, a herpetologist for the National Aquarium. As far as Oleander goes, he’s like your typical Washington aide.

Dumas: I take care of her every need here. I guess you could say I’m the chief aide. Anything that happens with her, I pretty much know about or made happen.

CNN: She hasn’t been here long. But she already looks like she’s used to holding out for what she wants.

Dumas: Absolutely. As far as eating goes, we’ve tried a number of different fish, different species of rodents.  She really has only an affinity right now for a smaller-sized frozen rat.

CNN: So she’s like some of these Washington types that develop strange appetites once they get here.

CNN: But she doesn’t make those midnight calls to room service, because she has you, right?

Dumas: Yeah. And she doesn’t have thumbs, so it’s hard to dial. But she’s pretty low-maintenance, which is probably atypical for a lot of people in this area.

Dumas: Nope. She is all white.  Albinism is the lack of all dark pigments. She’s dark-pigment free.

CNN: So you could say she’s post-racial.

Dumas:  There are more than 2 million gators in the U.S. in the wild.  There are less than a hundred known albinos.

Dumas: Alligators spend a large chunk of time doing absolutely nothing. They’re an ambush predator for the most part. They’re going to sit around and wait for something to come by. If it doesn’t, they’re fine.

And, she believes in term limits. She’s only in Washington until February. Then she goes back home to her alligator farm in Florida.