Six US oil executives who traveled to Venezuela in 2017 and were arrested on corruption charges have been found guiâ€twitter.com/i/web/status/1â€¦P4

President Donald Trump said for the first time he will leave office if the Electoral College votes for President-elâ€twitter.com/i/web/status/1â€¦FI 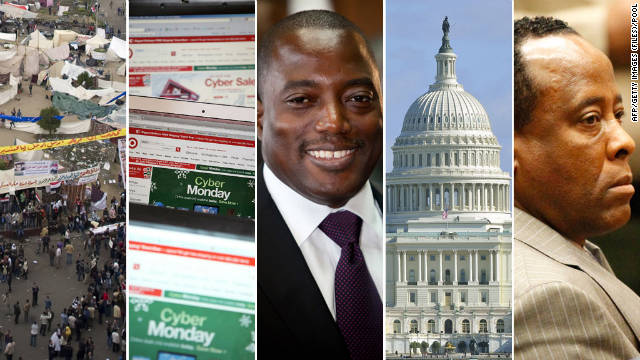 Streets in Egypt's capital, where violence broke out this month as demonstrators rallied for a quicker transition to a civilian-controlled government, were tense Sunday a day ahead of parliamentary elections.

The first stage of elections for Egypt's parliament is expected to go from Monday to Tuesday. With protesters still packed in Cairo's Tahrir Square on Sunday, the head of the Supreme Council of the Armed Forces said elections would go ahead as planned, and that he would not allow the military "to be pressured by any individual or entity," state media reported.

A military council took charge of Egypt after protesters ousted President Hosni Mubarak in February, and the military promised that eventually a civilian government would be elected and take over. But many demonstrators are pushing for a quicker transition. They are concerned that the military, which would continue to be Egypt's top authority until a president is in place, wants to keep a grip on the country. Many also have voiced anger about a proposed constitutional principle that would shield the military's budget from scrutiny by civilian powers.

Results of parliamentary elections are expected to be made final on January 10.

At least 42 people have been killed in recent demonstrations in Egypt, including at least 33 in Cairo. An additional 3,250 have been wounded, the Ministry of Health's Dr. Hisham Shiha said.

A committee of Arab League officials is expected to meet in the coming days to work on details of economic sanctions that the league voted to impose on Syria over the weekend.

Foreign ministers of 19 Arab League nations on Sunday voted to impose the sanctions after Syria declined to allow league observers into the Middle Eastern country to monitor the government's response to civil unrest. The league had given Syria a deadline of last Friday to comply.

The foreign ministers agreed to stop dealing with Syria's central bank, ban high-profile Syrian officials from visiting Arab nations and freeze the assets of the Syrian government, according to a senior league official who asked not to be named because he was not authorized to speak to the media.

Since March, protesters in cities across Syria have demanded President Bashar al-Assad's ouster and democratic elections. The United Nations estimated this month that more than 3,500 Syrians have died in a government crackdown. Al-Assad's government has consistently blamed armed gangs for the violence.

European Union leaders and U.S. President Barack Obama will have a summit Monday in Washington, where they are likely to discussÂ tactics to resolve Europe's debt crisis, CNNMoney reports.

One of the hottest online shopping days of the year is likely to draw more than a few people away from duties at their desks on Monday.

According to a Shop.org survey, nearly 60% of workers will go online to shop for holiday gifts at work on Cyber Monday, the Monday after Thanksgiving when retailers push some of their best online promotions, CNNMoney reports.

Last year's Cyber Monday was the most popular online shopping day of the year with sales of more than $1 billion, according to data compiled by online tracking firm ComScore, CNNMoney reports.

Kabila in 2001 succeeded his father Laurent Kabila, who was assassinated four years after he toppled Sese Seko. Joseph Kabila won a United Nations-overseen election in 2006, and that election was considered a bridge to transition from a dictatorship. Analysts say this year's election is a true test of Congo's democracy, CNN's Faith Karimi reports.

Congo's success is seen as vital to the African Great Lakes Region, but a decade of conflict between government forces and armed militias has left millions dead as a result of the fighting, hunger and disease.Â The international community has spent massive amounts of money in an effort to stabilize the vast nation.

One ofÂ three major credit rating agencies is expected to announce Thursday whether it will put the United States' credit rating on a "negative watch" as a result of the congressional super committee's failure to agree on deficit cuts this month, according to CNNMoney.

Under Fitch Ratings' definition,Â "negative watch" indicates a greater than 50% chance that a downgrade will follow in the next two years.

In August, S&PÂ lowered the U.S. rating to AA-plusÂ from the perfect AAA and said its outlook was negative. Moody's and Fitch still hold the U.S. credit rating at the highest possible standard.

Last week, Moody's saidÂ that it will maintain its Aaa rating, and Standard & Poors said it will keep its rating for U.S. bonds at AA-plus for the time being.Â Both Moody's and S&P haveÂ the country's credit rating on negative watch.

Murray to be sentenced Tuesday in Jackson's death

A doctor who was found guilty of involuntary manslaughter in the 2009 death of pop icon Michael Jackson is scheduled to be sentenced on Tuesday.

Dr. Conrad Murray can be sentenced to up to four years in prison. Prosecutors, in a sentencing memo filed last week, asked for the maximum prison term and said they also want Murray to pay Jackson's children more than $100 million in restitution.

Defense lawyers, in their filing, asked for probation, not prison time, in light of the "manifold collateral consequences" Murray is suffering because of the felony conviction, including the loss of his medical career.

A jury found Murray guilty this month of causing Jackson's death. The Los Angeles County coroner ruled that Jackson died from a fatal combination of the surgical anesthetic propofol and sedatives, which prosecutors blamed on Murray's reckless efforts to help Jackson sleep.

Jackson's death came as he was preparing for a series of comeback concerts in London, which the defense argued caused great pressure on the singer to seek sleep or risk having the concerts canceled.

The most inspiring preacher youâ€™ve never heard of is a pulpit giant, a storyteller who redefined the art of preaching. But Fred Craddock doesn't run a megachurch or a TV ministry. His sermons are informed by a chaotic upbringing - and a quest to win over one man.

For CNN.com's Monday Profile, John Blake takes a look at the Georgia preacher. The story will hit the homepage on Monday, but you can get a sneak peek at the profile here.

An ancient Islamic necropolis containing over 4,500 bodies has been uncovered in northeastern Spain, with archaeoloâ€twitter.com/i/web/status/1â€¦6M
cnni

3:17 pm ET November 27, 2020 RETWEET
Brazilians outraged by the death of a Black man after being beaten by supermarket security guards have been protestâ€twitter.com/i/web/status/1â€¦Mc
cnni

3:15 pm ET November 27, 2020 RETWEET
This mom is honoring the memory of her late daughter, who loved to sew, by using her sewing machine to craft face mâ€twitter.com/i/web/status/1â€¦kt
cnni