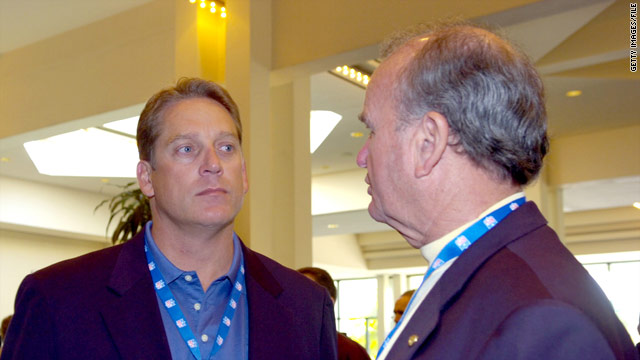 For a 3-8 team that has done little to turn heads this season, there was plenty of news coming out of the Jacksonville Jaguars' clubhouse Tuesday as owner Wayne Weaver fired his coach, then announced he would step aside himself.

Defensive coordinator Mel Tucker will take the helm for the rest of the season, according to the Jaguars' website, which notes that the defense has been one of the few bright spots for the team this year, "currently ranking fourth in the NFL and fourth in pass defense."

The bigger news, however, may have been Weaver's announcement that he had agreed to sell his team to Shahid Khan, an Illinois businessman. The deal must be approved by the league and other team owners.

"I am excited for the team and for our great fans because Shahid will bring passion and commitment to the job. He is committed to restoring a winning tradition here in Jacksonville," Weaver said.

Khan, a Pakistani native, began working for Flex-N-Gate Corp. in 1970, while he was in school, the Jaguars website says. After graduating from the University of Illinois in engineering in 1971, Khan worked for Flex-N-Gate until 1978 before going into business for himself.

"He began a new business designing and manufacturing innovative lightweight, continuous metal bumper systems, with no seams to corrode or rust. Today, nearly two-thirds of all North American pick-up trucks and sport utilities have bumper systems based on Khan’s designs," the website says.

Khan told the website it has "long been my personal and professional goal” to own an NFL franchise and he is "fully committed to delivering Jacksonville its first Super Bowl championship."

There has been lots of speculation that the Jaguars might relocate so the latter statement from Khan may come as a relief to pro football fans in North Florida.

Jacksonville and the Carolina Panthers joined the NFL as expansion teams in 1995, and the Jags made an immediate impression, reaching the playoffs in four of their first five seasons, including two division championships and a 14-2 campaign in 1999.

Since 1999, however, the team has reached the postseason only twice and fan enthusiasm has waned. The team presently ranks 26th among the NFL's 32 teams in attendance. Del Rio steps down after posting a 68-71 record during his time there.