The federal government announces new water cuts for the Southwest as the Colorado River plummets into an even deepeãtwitter.com/i/web/status/1ãÎ0j

The Justice Department is opposing the release of details in an affidavit that lays out reasons for the Mar-a-Lagoãtwitter.com/i/web/status/1ãÎ9t

Rudy Giuliani has been informed that he's a target of an investigation in Georgia into efforts to subvert 2020 elecãtwitter.com/i/web/status/1ãÎCy 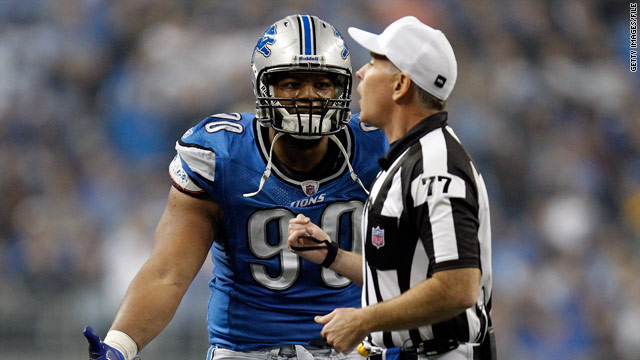 Ndamukong Suh argues with a referee after being ejected from the Thanksgiving Day game against the Packers.
November 29th, 2011
01:12 PM ET

Lions' Suh gets two-game suspension after Thanksgiving stomp on Packer

Ndamukong Suh was not in the holiday spirit during the Detroit Lions' 27-15 loss to the undefeated rival Green Bay Packers on Thanksgiving.

Now, barring an appeal, the Lions defensive tackle will miss two games without pay for stomping Evan Dietrich-Smith, and at least one observer believes Suh should give thanks for the suspension.

If you were in a tryptophan haze and missed or forgot the altercation, you can check it out here. The video shows Dietrich-Smith block Suh to the ground before Suh turns him over, shoves his helmet into the turf and, as two Packers intervene, stomps Dietrich-Smith's arm while the Packers offensive lineman is lying on the ground.

Suh's reaction after the incident drew almost as much criticism as the act itself. He said he was trying to catch his balance and didn't intentionally step on Dietrich-Smith. You can decide for yourself after watching the aforementioned video, but Suh backtracked from this defense, which critics say was weaker than the New York Giants'ô on Monday night.

Later, via Facebook, Suh apologized, saying, ãMy reaction on Thursday was unacceptable. ... I made a mistake, and have learned from it. I hope to direct the focus back to the task at handô - by winning.ã He also called NFL Commissioner Roger Goodell and apologized for his behavior, according to ESPN.

There's lots of talkô saying Suh is a dirty player who likes to beat up quarterbacks, he's faced league discipline in the past, he's been fined tens of thousands of dollars - and this is just his sophomore year. But the NFL Playbook blog points out that Suh was getting as good as he was giving prior to the stomp.

"On several plays, Green Bayãs guards ... got a nice hold of Suhãs shoulder pads, and, a couple times, his facemask. We saw two instances in the second quarter, specifically, where Dietrich-Smith tugged at his helmet gear. Thatãs on top of all of the everyday scraps and blocks to the legs a stud DT has to handle," the blog reported. "What had to be even more frustrating for Suh? The Packers blocked him pretty well."

Sports Illustrated's Chris Burke wrote that in addition to the financial blow - Suh will miss about $164,000 in game-day pay as he sits out against the New Orleans Saints and Minnesota Vikings - the Lions will doubtless miss their 2010 defensive rookie of the year as they scrap it out with the Chicago Bears for second place in the NFC North and, perhaps, a wild-card berth in the playoffs (sorry, Lions fans, catching the Packers seems wildly unlikely).

But Burke says Suh should take his suspension - and like it.

"The two-game suspension is fair punishment for what Suh did," Burke wrote. "And instead of hassling with an appeal, the smartest move he could make now is to take his medicine, sit out the next two weeks and do his best to repair the damage heãs doneô - to his reputation and to his teamô - once he returns."

10:34 pm ET August 16, 2022 RETWEET
ãOne promise that I made to myself (is) that when my rugby career ended, I would continue to live the rest of my litwitter.com/i/web/status/1ãÎrG8j
cnni

10:00 pm ET August 16, 2022 RETWEET
A number of rockets struck near a military base in northeastern Syria housing US troops but did not cause any injurãtwitter.com/i/web/status/1ãÎ51
cnni

10:34 pm ET August 16, 2022 RETWEET
ãOne promise that I made to myself (is) that when my rugby career ended, I would continue to live the rest of my litwitter.com/i/web/status/1ãÎrG8j
cnni

10:00 pm ET August 16, 2022 RETWEET
A number of rockets struck near a military base in northeastern Syria housing US troops but did not cause any injurãtwitter.com/i/web/status/1ãÎ51
cnni

2:24 pm ET August 16, 2022 RETWEET
The federal government announces new water cuts for the Southwest as the Colorado River plummets into an even deepeãtwitter.com/i/web/status/1ãÎ0j
cnnbrk