A block away from the New York Stock Exchange, a few dozen Occupy Wall Street organizers show up to work every day at an office building in the heart of Manhattan's Financial District. The movement may have lost its public face - a handful of protesters appear at Zuccotti Park on any given morning - but the folks who sit at desks inside the office said Occupy is still very much alive despite the recent evictions of encampments across the country.

CNN was granted exclusive access to the office where signs with critical information and phone numbers hang on the walls alongside artwork featuring slogans familiar to the movement. Groups of people cram into the small conference rooms for strategy sessions. 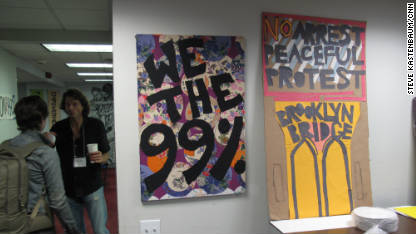 The office space appears to be the movement’s nerve center. But the volunteers who plan future actions, network with other Occupy protests and deal with logistical issues insisted the location is not Occupy Wall Street’s headquarters.

“This is just an office space that a handful of people have tried to make a resource for the Occupy Wall Street movement,” said Han Shan, a member of Occupy Wall Street’s press relations and direct-action working groups. “Everybody is looking around trying to figure out where the heck the headquarters is, and the truth of the matter is this movement is bigger than any piece of geography, than any piece of real estate, than any square block.”

Click the audio player to hear more on this CNN Radio report:

“This is one of our offices, it’s not a headquarters,” said Megan Hayes, a volunteer who said she puts in about 50 hours each week at the office space and other locations where Occupy Wall Street has set up shop.

“It’s nice at times to not have the rain over your head, especially when you’re trying to type on your computer,” Hayes said, “but we would still get the same amount of work done with or without this office space.”

Still, the effort critical to maintaining the movement’s momentum gets done in the cubicles and conference rooms at the office every day. The finance committee manages expenses and donations. A communications group disseminates information agreed upon by consensus. The housing group makes sleeping arrangements for protesters who had nowhere to go after police raided their encampment in Zuccotti Park.

Occupy organizers said no one at the office receives pay for his or her work. It’s an all volunteer staff. They began using the office space a few weeks before police removed their encampment. 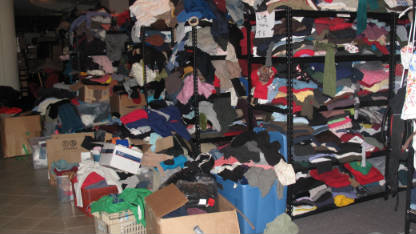 The office receives donations of clothing, blankets for those braving the cold weather.

“We found a donor who was generous enough to pay the rent,” Shan said.

The donor has chosen to remain anonymous.

“I think it’s been a really useful and important space. … It’s really just another place where people can come and get work done.”

Another place where decisions are being made is a short walk from the New York Stock Exchange, the public atrium at 60 Wall St. The privately owned public space is on the ground floor of the building that houses Deutsche Bank, one of the institutions that Occupy Wall Street has targeted.

“This is actually one of our central meeting areas,” Occupy activist Haywood Carey said. “Every evening we see hundreds of folks coming in here from dozens and dozens of different groups coming to work together collaboratively to help advance the movement.”

Brett Goldberg participates in the facilitation group’s meeting at the atrium.

“Our role is to just keep the conversation going, to make sure that the process that we’ve all agreed to follow for proposals is adhered to, but also to ensure that all voices are heard," he said. 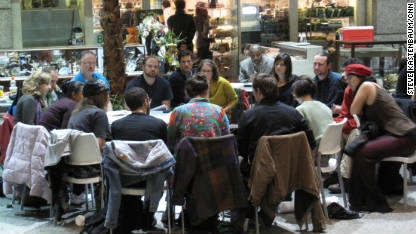 Next to his meeting a few dozen people were taking part in the direct-action group’s session. They were planning Occupy demonstrations that would take place outside a meeting of defense contractors and at a Democratic Party fundraiser in New York attended by President Barack Obama.

Despite the strategizing under way in the Occupy Wall Street office space, no one in the movement can say where it will be in six months.

As for a clear set of goals, Goldberg said, “It would be wonderful if the media stopped looking for demands because I think you will be unsatisfied."

He added, "Many of us in the movement don’t want a list of demands because that is empowering someone else to create a change for us.”

Goldberg said he and the others are creating change from the bottom up in their leaderless movement.

“It’s the core of who we are, which is a decentralized, people-driven process," Carey added.

At the Occupy Wall Street office, Drew Hornbein worked on his laptop getting the message out. He joined the movement before there was an occupation to speak of, taking part in the planning for the initial protest in August. Those early meetings were held at Tompkins Square Park in New York’s East Village. The park has long been associated with anti-establishment movements.

“I thought we were going to go down, sleep on the street for a few days, have our …  maybe Page 2 in the paper and then the police were going to send us home,” Hornbein said.

In those early days, he said he never thought of the possibility of Occupy protests occurring around the world.

“It’s just beyond anything that I could have ever imagined," he said.

He, too, can’t say where the Occupy movement is going. He said he just wants more people to get involved.

“It may be foggy, and you may not know where it’s heading, and it may have false starts and abrupt endings, and be weird and different and look and smell strange,” Hornbein said. “But it’s better than just continuing along thinking that something’s going to happen.”

- CNNMoney’s Poppy Harlow and Alex Nelson contributed to this report.