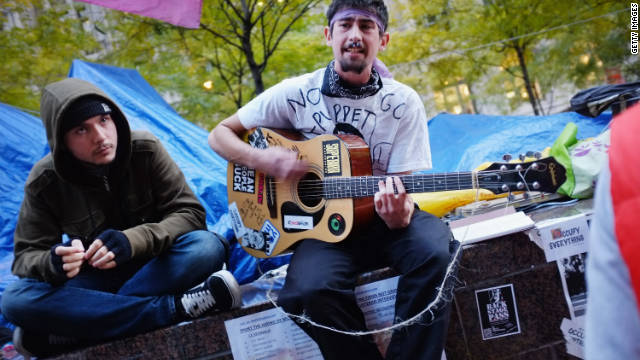 The most powerful social movements come accompanied with music - gospel-tinged chants for the civil rights movement, psychedelic rock for the hippie era of the late 1960s.¬†But what about Occupy? Does the recent protest against corporate greed have a beat?

While artists such as Kanye West were visible at protest sites early on to lend support, musical content specifically addressing the movement has been sparse. Along with the debut of OccupyMusic.org in October, recent stirrings across the country show that a soundtrack, as fluid and organic as the movement itself, is being woven alongside the protest.

Third Eye Blind released ‚ÄúIf There Ever Was a Time‚ÄĚ last month. Lyrics included a direct call to action: "If there ever was a time to get on your feet, take it to the street, come on and meet me down at Zuccotti Park."

The bridge between the movement and music was further strengthened recently when producers announced a compilation album was in the works called ‚ÄúOccupy This Album.‚ÄĚ Artists such as David Crosby, Lloyd Cole, Jackson Brown, Devo, Third Eye Blind and Yo La Tengo have signed on to the project, the producers said in a statement.

You would think a movement born of disillusionment would yield somber music, but instead of dirges about economic woes the compositions coming out of the Occupy camps strike upbeat chords and fuel optimism.

Atlanta student and activist songwriter Ariel Root Wolpe is part of the musical movement. Her song ‚ÄúOccupy‚ÄĚ has gotten positive reviews from listeners around the city.

A Philadelphia native studying religion and music at Emory University, Wolpe said she was motivated to write the song after hearing ‚Äúall the negativity the movement was getting.‚ÄĚ

While she made clear that she‚Äôs not a protester per se (she‚Äôs been to the Occupy Atlanta gathering once), she said she supports the movement and has been moved by what it stands for.

‚ÄúAll I knew was what I was getting from the media, railing on the movement, saying they didn‚Äôt have a purpose. But then I started to see a lot of the (Occupy) videos on YouTube, and I watched them to get a feel for events on the ground.‚ÄĚ

Those videos helped give a voice to her song, she said.

‚ÄúWhat I wanted to say is that there is a diversity of issues, a diversity of people that want to be heard, and the song tries to portray that,‚ÄĚ she said. ‚ÄúThey all have something to say and they‚Äôre coming together because they all have an issue.‚ÄĚ

Click the audio player below to hear Wolpe's "Occupy"

‚ÄúThe chorus is saying, ‚ÄėAsk them, instead of passing judgment on them why they‚Äôre down there.' Go down and ask the people because it‚Äôs easy to make harsh judgments on people in a space that‚Äôs away from what they‚Äôre going through, ‚ÄĚ she said.

Below are the beginning lyrics to ‚ÄúOccupy.‚ÄĚ

To occupy their home

To occupy their job

‚ÄúThe lawsuit from Donya Prioleau alleges that Bing asked her if she liked guns and told store employees, includingtwitter.com/i/web/status/1‚Ä¶Fj3a
susancandiotti

‚ÄúThe lawsuit from Donya Prioleau alleges that Bing asked her if she liked guns and told store employees, includingtwitter.com/i/web/status/1‚Ä¶Fj3a
susancandiotti