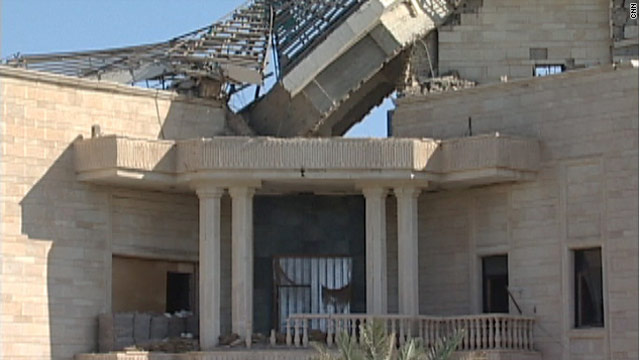 A prison of his own making

The sprawling Victory Base Complex was America’s largest in Iraq, located near the Baghdad Airport.

It was essentially an American city, at one time home to more than 40,000 troops.

Now as the United States ends its military mission and troops head home, the base has been turned over to the Iraqis.

There are nine of Saddam Hussein’s palaces here.

The grandest are the four that stand on an artificial lake.

Hussein was so impressed with the ones at Versailles, the story goes, he decided to build his own.

And one of the four held a secret.

It’s the one the U.S. bombed when the war began.

Despite the hustle and bustle of the American-made city that flourished all around it, this building with its roof damaged and askew sat silent and vacant - only it wasn’t.

The outside was a ruse.

Contractors had secretly gone into the palace and replaced the interior with a maximum security prison built to hold three people.

It actually would only house two - Saddam Hussein and his cousin Ali Hassan al-Majeed, aka Chemical Ali.

The U.S. military believed the phony ruins and the secret they held would prevent sympathizers from attempting to spring Hussein.

Inside, instead of an ornate gilded bed, Hussein slept on cement. The toilet and steel door to his cell have been removed and shipped back to a museum in the states.

Here he would spend 23 hours of every day. He got one hour to recreate, which in his case meant tending to the small garden he and his cousin tilled in a courtyard.

Everything in it has since died. Once all of Iraq’s soil was his, but in his final days he controlled only a square meter.

There is the irony I’m sure not lost on his U.S. captors.

Saddam Hussein who built the palaces and filled them with his ego and his excess would end up a prisoner inside one of them.

And then there's this analogy too good to pass up.

As they left, U.S. forces handed the Iraqis hundreds of keys carried on two rings.

They are the keys to Victory. The question now is what will Iraq do with them?