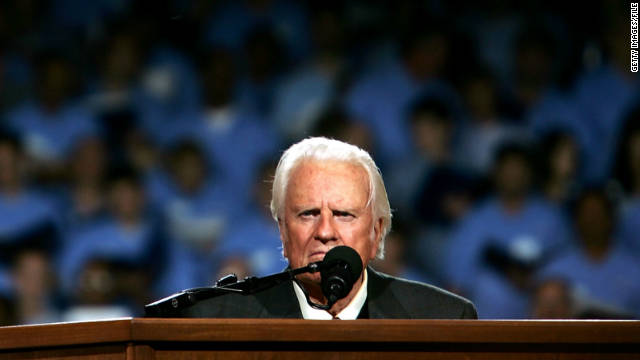 Evangelist Billy Graham is showing signs of improvement as he continues to recover from pneumonia in a North Carolina hospital, a spokeswoman for Asheville's Mission Hospital said Sunday.

The 93-year-old Graham was admitted to the hospital Wednesday in stable condition.

"Doctors are encouraged by Mr. Graham's significant clinical progress, but have not yet set a date for discharge," hospital spokeswoman Merrell Gregory said in a statement.

Gregory also reported progress in Graham's physical therapy, saying he is "walking more in the private corridor outside his room."

Graham was visited over the weekend by his family, according to Gregory. He also watched on television his pastor deliver his regular Sunday sermon, she said.

This is Graham's second bout with pneumonia this year. He was previously hospitalized for the infection in May.

Italy's new prime minister late Sunday proposed Ōé¼30 billion ($41 billion) in new taxes and spending cuts over two years, including reductions to future pensions, in an effort to end a budget crisis that has clouded the future of Europe's common currency.

About Ōé¼20 billion would come from cuts, including major changes to how Italian workers' pensions are calculated and a one-year increase in retirement ages, Prime Minister Mario Monti announced Sunday night. Italian workers also would see their pensions based on their entire working life, rather than the last three years - a move that could cut the average retiree's pension by about Ōé¼100 ($135) per month.

The rest of the package involves a 1.5% tax on financial transactions, a new tax on high-end boats, cars and planes, efforts to crack down on tax evasion and a bid to boost the Italian economy by rebuilding infrastructure.

U.S. Park Police surrounded a wooden structure erected Sunday by Occupy DC protesters, with a standoff ensuing and several arrests being made, according to witnesses.

The structure was built overnight in McPherson Square as a place where protesters could stay warm in the winter and hold their daily General Assembly meetings, according to Wade Simmons, one of the Occupy demonstrators.

Police ordered the structure taken down around noon Sunday, a post on the Occupy DC website reported, but about a dozen people remained perched on top of or inside the building, which was donated by a father-son architect team. As many as 200 people gathered at the park to watch the standoff.

Police put up barriers around the structure and cordoned off nearby streets with yellow tape as protesters chanted, "This is a nonviolent movement," and, "Put the pepper spray away." 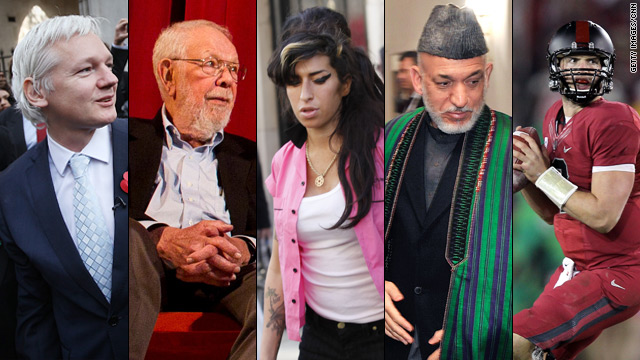 He is expected to argue that his case raises a question of general public importance and so should be decided by some of the country's most senior judges.

Assange lost a high court battle against removal last month but has announced he wants to continue the fight against a European arrest warrant that has been outstanding since last December. A Supreme Court hearing would be the third stage of the 40-year-old Australian's appeal against extradition to face allegations of rape, sexual molestation and unlawful coercion by two women he met on a visit to Stockholm in August 2010.

Assange has been under house arrest for nearly a year.

The secret life of Julian Assange

The euro needs a hero

Investors in the U.S. and abroad will be looking to Europe to determine how to bet on the markets.

The big difference this week: Investors have a newfound faith that central bankers and politicians will work together to keep the markets from falling into disarray.

There's that much more pressure on the leaders of 27 European Union nations to give the market answers to how the sovereign debt crisis can be cured when they meet in Brussels on Thursday and Friday.

And investors will be listening carefully to whether Mario Draghi, the newly installed president of the European Central Bank, will consider buying bonds to help the European economy following the bank's regularly scheduled policy meeting Thursday.

Inside the Mad world of cartoonist Al Jaffee

Al Jaffee, who will be 91 in February, is known for his artistic contraptions, many designed during his long relationship with Mad magazine. There's the┬ĀMad Fold-in, the magazine's inside back page, which cleverly turns one Jaffee work into another by folding one portion over another. There's "Snappy Answers to Stupid Questions," in which a humdrum question leads to several unexpected sarcastic responses.

JaffeeŌĆÖs anchor has always been art. He thought he was ŌĆ£just being very sillyŌĆØ - he didnŌĆÖt realize he was paving the way for The Onion and Jon Stewart.

In this week's Monday Profile, CNN.com's Todd Leopold unwraps the quirky intellect behind the even more quirky artwork, as well as his relationship with Mad mastermind Bill Gaines.

Nearly 100 nations will gather in Bonn, Germany, on Monday to chart the peace process for Afghanistan. The summit comes amid fresh tensions after the deaths of 24 Pakistani soldiers in a NATO airstrike.

Amid a backdrop of economic troubles for most Western nations, Afghanistan officials will look to get assurances from world powers that long-term commitments to the war-torn country arenŌĆÖt forgotten.

While early reviews have been cordial, critics say it is readily apparent that the 12-track collection, featuring original and alternate versions of classic songs, was cobbled together rather quickly.

The album comes days after a dress the singer wore for her "Back to Black" album cover fetched $67,120 at auction.

To build buzz for the album, the Winehouse camp recently released via YouTube WinehouseŌĆÖs version of the 1960sŌĆÖ hit by Ruby and the Romantics, ŌĆ£Our Day Will Come.ŌĆØ

College football's most prestigious individual award, the Heisman Trophy, will be awarded Saturday to the best player in the nation. This figures to be one of the tightest Heisman races in years as several players have turned in stellar seasons, including Alabama's Trent Richardson,┬ĀBaylor's Robert Griffin III and┬ĀStanford's Andrew Luck.┬ĀThe event will air live on ESPN.

Gas prices have fallen over the past two weeks, continuing their slide despite an increase in crude oil prices, according to a survey published Sunday.

The average price of regular gasoline is $3.29 a gallon, the Lundberg Survey found.

That's down 9 cents from two weeks earlier, and down a total of 18 cents over the past six weeks, said publisher Trilby Lundberg.

While crude oil prices rose $3.55 a barrel over the past two weeks, gas prices fell due to "shrinkage in the profit margins of the downstream portion of the oil industry - that is, refiners and retailers," Lundberg said. "They were unable to pass through the higher oil prices because American motorists' demand for gasoline continues to shrink due to hard economic conditions."

However, it's unlikely prices will continue to fall, Lundberg said., because refiners and retailers "will not be able to sustain losses on and on."

Press TV reported that the drone was "seized" by authorities after "minimum damage."

Attempts to reach U.S. officials for comment were not immediately successful.

In July, Iran's military made a similar claim, saying it downed a U.S. "spy drone" flying near its Fordo nuclear enrichment plant in Qom province. But Iran backtracked on the statement a few days later, saying the incident was actually part of a training exercise.

The Consumer Financial Protection Bureau: Like a mechanic with no tools?

Tim Geithner might be Endia EasonŌĆÖs new best friend. If he lived in Cleveland, sheŌĆÖd probably bake him a pie.

So why would a 91-year-old woman in southeast Cleveland want to bake a pie for the U.S. treasury secretary?

Because lately, Geithner has been publicly nudging Senate Republicans who have hamstrung a new consumer protection agency ŌĆō created to protect homeowners like Eason, and to stop what happened to her from happening to other people.

Eason nearly lost her home because┬Āa mortgage broker talked her into a $50,000 loan.