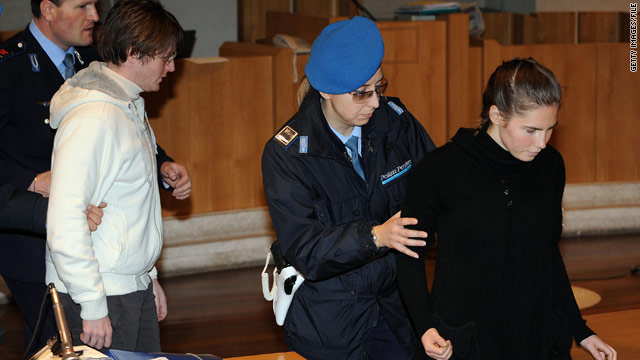 Knox's announcement came about a week after her former boyfriend Raffaele┬ĀSollecito inked a deal of his own. Sollecito signed with Seattle-based Martin Literary Management.

ŌĆ£This is a case I have followed from day one and never, not even for a moment, have I doubted the innocence of Raffaele Sollecito and Amanda Knox,ŌĆØ Sharlene Martin said in a news release. ŌĆ£IŌĆÖm honored to work with this fine young man and let the world know the real Raffaele ŌĆö a sensitive, compassionate and heartfelt person."

"He's never really spoken about that night and this is his opportunity to do so," Martin told CNN. "There's much more to┬ĀRaffaele than what the world has seen. He is an amazing young man. He is brave, he is heartfelt, he is compassionate. I think he is an incredible young man with a story to tell."

11:45 am ET April 21, 2021 RETWEET
The law delivered justice to George Floyd. America's political leaders are up next | Analysis by @StCollinsonŌĆtwitter.com/i/web/status/1ŌĆ”Sj
cnni

11:30 am ET April 21, 2021 RETWEET
Musician Ezra Furman has revealed she is a trans woman and a mother, telling fans she is "very proud" to "have comeŌĆtwitter.com/i/web/status/1ŌĆ”90
cnni

11:16 am ET April 21, 2021 RETWEET
While crowds celebrated Derek Chauvin's conviction, many reminded us there's a long road ahead for work on racial jŌĆtwitter.com/i/web/status/1ŌĆ”zw
cnni