An officer sought a supervisor's permission to shoot the gunman before he entered the school, says a report that ci‚Ätwitter.com/i/web/status/1‚Ä¶Ji 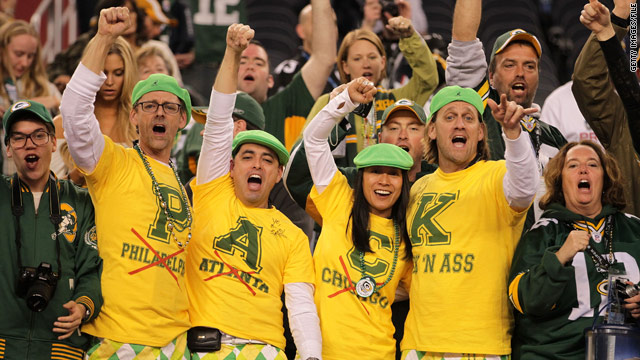 OK, maybe that was a harsh assessment of the team's first stock offering in almost 15 years, but reading the conditions outlining what you do not get with your purchase makes one wonder, What the heck do you get?

Let's glance at the myriad ways this stock is nothing like a stock: Only individuals can buy it, the Pack has no obligation to pay you back, no one can buy more than 200 shares, you receive no protection from securities laws, the team and NFL "severely restrict" any stock transfer and you should not expect any profit, dividend, tax deduction or economic benefit in general.

There's also this nugget: "Stock in the Packers does not constitute an investment in 'stock' in the common sense of the term." Funny word, that stock.

Oh, and you have to live in the U.S., Guam, Puerto Rico or the U.S. Virgin Islands to buy the, um, stock. I know the Chamorros are running for their checkbooks as we speak.

There are a few fringe benefits, though, even if I giggled when my close friend, a hardcore Cheesehead, instant messaged me this morning to say, "I am now an owner of the green bay packers! i voted to keep rodgers as starting quarterback next week!"

The Press-Gazette reports that those buying the initial allotment of 250,000 shares will be allowed "to vote on team business, including directors, and attend annual meetings. Shareholders do get such perks as exclusive locker room tours."

This is the fifth time in 92 years the defending Super Bowl champs and only publicly owned NFL franchise has asked fans to "come to the team's financial rescue," according to the team website. The Packers doled out more than 4.75 million stock shares with offerings in 1923, 1935, 1950 and 1997.

Kevin Quinn, an economist at St. Norbert College, told the Press-Gazette the 12-by-8-inch certificates were essentially memorabilia and defended those Packers faithful who would shell out a quarter-grand for one.

"It's not the worst thing you could spend your money on. You'd spend the same amount of money on a team jacket and you can't pass that on to the kids," he told the paper, without explaining why you can't pass on a jacket to your children.

So, best of luck, Packers fans. Estimates on how fast they will sell out range from "within minutes" to "never." Green Bay's front office says sales will run through February 29.

(Disclaimer: The author of this post is a Dallas fan who, despite an overtime choke versus the Cards on Sunday, would buy Cowboys stock if Jerry Jones could ever find it in his heart to give up a modicum of control.)

12:00 am ET July 7, 2022 RETWEET
If you spot a Gentleminion at a viewing of ‚ÄúMinions,‚Äù don‚Äôt panic ‚Äì they‚Äôre typically harmless, if irksomeltwitter.com/i/web/status/1‚Ä¶o/yaFIIOtayx
cnni

11:00 pm ET July 6, 2022 RETWEET
The Biden administration is putting sanctions on 15 individuals and entities who have been involved in illicit sale‚Ätwitter.com/i/web/status/1‚Ä¶D3
cnni

10:30 pm ET July 6, 2022 RETWEET
The crisis that UK Prime Minister Boris Johnson is facing right now might be the gravest for his leadership so far‚Ätwitter.com/i/web/status/1‚Ä¶3k
cnni

12:00 am ET July 7, 2022 RETWEET
If you spot a Gentleminion at a viewing of ‚ÄúMinions,‚Äù don‚Äôt panic ‚Äì they‚Äôre typically harmless, if irksomeltwitter.com/i/web/status/1‚Ä¶o/yaFIIOtayx
cnni

11:00 pm ET July 6, 2022 RETWEET
The Biden administration is putting sanctions on 15 individuals and entities who have been involved in illicit sale‚Ätwitter.com/i/web/status/1‚Ä¶D3
cnni

10:30 pm ET July 6, 2022 RETWEET
The crisis that UK Prime Minister Boris Johnson is facing right now might be the gravest for his leadership so far‚Ätwitter.com/i/web/status/1‚Ä¶3k
cnni

An officer sought a supervisor's permission to shoot the gunman before he entered the school, says a report that ci‚Ätwitter.com/i/web/status/1‚Ä¶Ji
cnnbrk