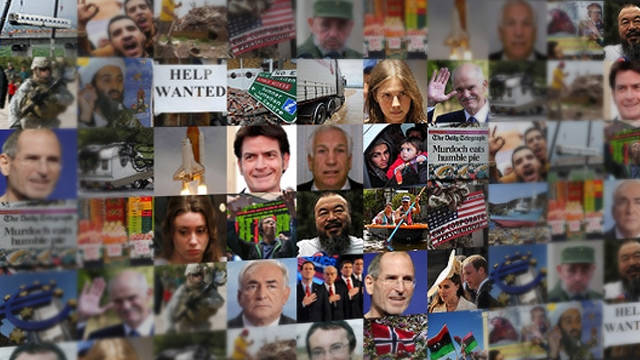 So it is interesting to examine what Twitter has released as its top news stories and trending topics of the year. CNN has also taken a look and created our own year in review.Â But we want you to vote onÂ what you think the biggest and most important stories of the year were.

When Hosni Mubarak's decades-long rule over EgyptÂ came to an end in February, Cairo's Tahrir Square was a scene of jubilation, as hundreds of thousands of people celebrated the fall of a man many had feared for years.

The revolution that sparked the topple of Mubarak's regimeÂ  was powered largely by a social media movement that took an online sentiment and brought it into the streets. People posted videos online, tweeted about the movement and continued to shout their message for all to hear. And now, for the first time since the end of Mubarak's 30-year rule, Egyptians will be able to choose their representatives to the nation's parliament.

Navy SEAL Team Six became part of American military lore when the elite unit raided a compound in Pakistan andÂ killed Osama bin Laden, the leader of al Qaeda and the most wanted terrorist in the world who had orchestrated the terror attacks of 9/11. It was a news event that sparked widespread excitement in the United States, where some celebrated the death of a man the country had been hunting for so long.

Besides being a major story, one that is leading in CNN's poll for the top story of the year, it was one that triggered a massive response in social networks with everyone wondering whether it was really true.Â But Twitter also had an interesting connection to this story. User Shohaib Athar (@ReallyVirtual) unknowingly was live-tweeting the raid.

His tweet? "Helicopter hovering above Abbottabad at 1AM (is a rare event)." Rare, indeed. And historic.

The earth shook off the coast of Japan in March, triggering one of the worst tsunamis in years, destroying nearly everything in its path and sending millions fleeing for high ground.

The quake was one heard about around the globe, thanks in part to Twitter's sharing of information, as it became clear there was utter calamity from the 9.0-magnitude earthquake. And Japan found itself dealing with the worst nuclear crisis since the 1986 Chernobyl disaster. The Fukushima Daiichi nuclear facility was knocked offline, resulting in a meltdown of three reactors, with radiation leaking into the air and contaminated water spilling into the sea.Â  You helped us share the story, too, by contributing to CNN iReport's Open Story, a collaborative effort of CNN and hundreds of iReport contributors who experienced the quake and its aftermath.

Rep. Gabby Giffords was shot in the head as she met with constituents at a supermarket near Tucson, Arizona. Six people were killed in the attack, including a young girl and a federal judge. Many people tweeted about the incident as it was happening, looked to find out more about the suspect in the shooting, Jared Loughner, and prayed for those who were killed and injured. The shooting also sparked a debate about gun laws in the state.

Giffords has awed the nation in her recovery.Â The congresswoman traveled to Kennedy Space Center in May to watchÂ her husband, astronaut Mark Kelly,Â command the final launch of space shuttle Endeavour.

Another uprising that played out on Twitter at a remarkable pace was the rebel's fight for Libyan freedom under the rule of long-time strongman Moammar Gadhafi.

As the battle for key areas raged in the country, including Tripoli, the clashes played out moment-by-moment on Twitter and in live blogs from many news organizations. Gadhafi was eventually killed in October after months on the run from rebel forces and NATO bombardments, news that was also met with great celebration in Libya.

News first began rolling in on Twitter that he had been captured. And then there were reports of his death. Videos began being circulated on Twitter from YouTube showing a man who was believed to be a bloodied and battered Gadhafi. The debate raged online as to whether he was in fact dead. Then following the confirmation of Gadhafi's death, an interesting debate swirled online, too: Was it necessary for us as a world to see the picture of the dead ruler to know for sure that he was gone for good.

3:00 pm ET June 30, 2022 RETWEET
Are you planning to travel for the Fourth of July? Rain might alter your plans. Hereâ€™s what to expectcnn.it/3a0SNOpyM
CNNweather

1:44 pm ET June 30, 2022 RETWEET
Summer means that lavender has come into season -- here are the some of the best places around the world to experieâ€twitter.com/i/web/status/1â€¦RI
cnni

3:00 pm ET June 30, 2022 RETWEET
Are you planning to travel for the Fourth of July? Rain might alter your plans. Hereâ€™s what to expectcnn.it/3a0SNOpyM
CNNweather

1:44 pm ET June 30, 2022 RETWEET
Summer means that lavender has come into season -- here are the some of the best places around the world to experieâ€twitter.com/i/web/status/1â€¦RI
cnni