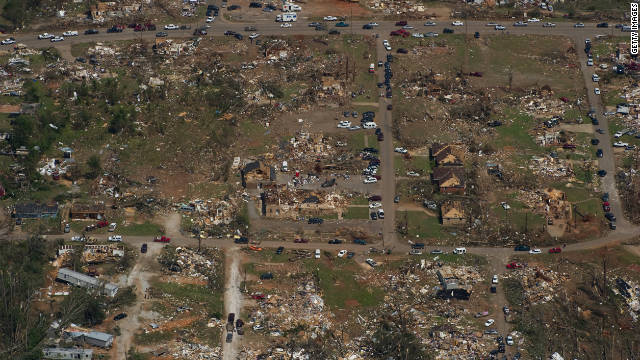 A series of April tornadoes in the Southeast, including in Tuscaloosa, Alabama, was one of 2011's costliest weather events.
December 7th, 2011
08:25 PM ET

The United States had a record 12 weather and climate disasters that caused at least $1 billion in damages in 2011, and that number could increase as other assessments wrap up, the National Oceanic and Atmospheric Administration said Wednesday.

The countryŌĆÖs old record for weather and climate disasters costing at least $1 billion was nine, set in 2008.

The yearŌĆÖs costliest disaster so far is the April 25-28 tornado outbreak that killed 321 people in central and Southern states, including Alabama, where the Tuscaloosa, Birmingham and Huntsville areas were hard hit. Losses in that outbreak have totaled $10.2 billion, according to NOAA.

Also on the 2011 list is a multimonth drought and heatwave in the southern Plains and the Southwest, which so far has caused nearly $10 billion in direct losses to crops, livestock and timber, NOAA says. The cost will rise because the drought and the year arenŌĆÖt finished.

Another disaster on the list is the May 22-27 Midwest/Southeast tornado outbreak, including a tornado that killed 158 people in Joplin, Missouri. That outbreak killed at least 177 people and caused damages of more than $9.1 billion, according to NOAA.

ŌĆ£In my weather career spanning four decades, IŌĆÖve never seen a year like 2011,ŌĆØ National Weather Service director Jack Hayes said in a video posted on NOAAŌĆÖs website. ŌĆ£Sure, weŌĆÖve had years with extreme flooding, extreme hurricanes, extreme winter snowstorms and even extreme tornado outbreaks. But I canŌĆÖt remember a year like this in which we experienced record-breaking extremes of nearly every conceivable type of weather.ŌĆØ

The year already had a record-breaking 10 $1 billion disasters before this week, but NOAA added two to the list on Wednesday: Wildfires in Texas, New Mexico and Arizona (more than $1 billion), which previously had been counted in the southern Plains and Southwestern drought; and June 18-22 tornadoes and severe weather in the Midwest and Southeast (three dead; $1.3 billion).

The other seven $1 billion events, according to NOAA, were:

NOAA said it is continuing to assess damage data from other events, including a pre-Halloween storm in the Northeast and Tropical Storm Lee.

This yearŌĆÖs 12 events have totaled about $52 billion in damages, but they arenŌĆÖt the countryŌĆÖs costliest set of major disasters, NOAA said. In 2005, the country had five disasters costing more than $1 billion - including Hurricane Katrina - with a total cost of more than $175 billion in 2011 dollars, according to NOAA.

The United States had a yearly average of 1.2 weather/climate disasters causing more than $1 billion in damages in the 1980s, according to NOAA. The average was 3.8 per year in the 1990s and five per year between 2000 and 2009.

"The example set by Trump ŌĆö disparaging, assaulting and undercutting a country's democracy ŌĆö has now become the ttwitter.com/i/web/status/1ŌĆ”dvLrQl
cnni

10:00 pm ET September 18, 2021 RETWEET
The planet is careening toward warming of 2.7 degrees Celsius above pre-industrial levels -- far above what scientiŌĆtwitter.com/i/web/status/1ŌĆ”ID
cnni

7:22 pm ET September 18, 2021 RETWEET
SpaceX capsule splashes down off the coast of Florida, marking the end of the first all-tourist mission to Earth'sŌĆtwitter.com/i/web/status/1ŌĆ”YY
cnni