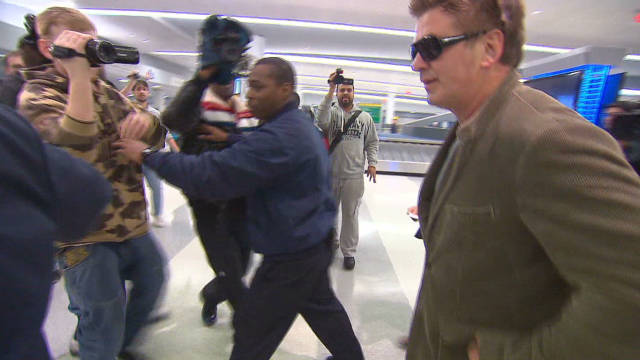 Overheard on CNN.com: Baldwin's refusal to turn off cell phone no surprise to many

Alec Baldwin's addiction to the cell phone game "Words with Friends" got him booted from an American Airlines plane parked at a Los Angeles International Airport gate Tuesday, the actor's spokesman said.

Readers focused on two issues: outrage over Baldwin's behavior toward a flight attendant and frustration over rules about the in-flight use of cell phones and electronic devices. They also commented on Baldwin's past treatment of his daughter and public comments he's made.

Many readers, such as MistrMistr, expressed outrage: "So because he's a 'star' he can break the rules? Then he goes on Twitter and tells his sheep about (it) so they can all be amazed that they would do that to the 'Alec the Great.' But the worst part? American Airlines is kissing his butt."

Other commenters agreed, saying celebrities should not be entitled to special treatment on airplanes.

lcook5: "American Airlines is not a big favorite with me, but this is ridiculous. Not complying with federal flight restrictions should get anyone kicked off a flight. Why do some of the rich and/or famous see themselves as above the law? If I were American Airlines, I would permanently ban him from any additional flights and advise all other airlines of the potential problems if they allow him to fly with them. Baldwin should be ashamed of himself."

Readers said Baldwin was hard on the flight attendant, although there were some who were curious about what happened.

cons2tution: "No, what is criminal is that you jump to conclusions without knowing all the facts. How many times was he asked to turn off the device? Was he warned that he needed to turn it off? Was he told - in direct fashion - to turn it off?"

Bad behavior on a plane is nothing unusual, a few commenters noted.

Smyling: "I'm surprised they picked on someone in first class. I've been on flights lately where the people in front of us in economy reclined as we were boarding, and ignored the flight attendants asking them to put their seats upright. Incredible. I've also sat next to someone who kept typing on a laptop as we were landing! The lack of regard for rules of any type on planes is amazing. But the worst were three people who filed and painted their nails on a transatlantic flight - three coats of varnish - and then cut their toenails and painted those! Talk about toxic!"

Some readers mentioned the game wasn't worth the trouble.

JoseinLargo: "I think Baldwin sounds pretty childish in this story."

newFuture2: Sounds like a 'Words With Friends' advertising campaign ('guerilla marketing') actually. Never heard of it ...  and not interested. ...  Life's too short. ...

sadtosay: "The best part is that game is not at all real-time based. Waiting a few minutes to make a move has no more consequence than waiting a day."

One reader took notice of the 70th anniversary of the attack on Pearl Harbor:

ruseaworthy: "On the day we all pause to remember Pearl Harbor, it's sad to think so many great men died so idiots like this could convince themselves they are somehow important in the history of mankind."

Another noted Baldwin's technology use, connecting it with the late Apple CEO Steve Jobs' reputation for having a caustic personality:

Jeffbaseball: "Baldwin is a reflection of the arrogant tech society. "Me and my personal electronics are more important than you" mentality. It's amazing how narcissistic America thinks only about themselves. Steve Jobs, you did a great job into fueling the fire of American arrogance."

DrTrollworth: "Yes, I blame Steve Jobs entirely for this one. If he hadn't ever influenced America, we wouldn't be in this mess."

There were a lot of comments that addressed what some readers believe is a pattern of behavior in Baldwin's life.

Devices: "This guy makes TV commercials for Capital One Bank one day and goes out to support (Occupy Wall Street) the next day. Now this CNN story adds another black mark to his faltering reputation caused by the gross voice message he left his daughter."

LisaBoo: "Use to like this guy, but remember that recording that was released of him (screaming at) his daughter? Well, I lost a lot of respect for him at that point. And now I'm not surprised at all by this; this man has no regard for rules or how he talks to people."

One reader came to the defense of Catholic school gym teachers everywhere.

Arkady: "What's wrong with being a retired Catholic school gym teacher?! I, myself, did not go to Catholic school. But, back in the day, the one in my area - St. Anthony's - had some of the best lacrosse and football on Long Island! I'd even met some of the guys who went there, and they all seemed like straight-up dudes!"

Another reader said the flight attendant was out of line:

Amemor: "Anyone remember when flight attendants acted like they were happy to have you aboard?"

RusTnuts: "Oh yeah, that was back when people didn't feel it was their right to abuse the people serving them. If Baldwin would have pulled that in a New York McDonald's, he would have got a serious Hollywood beatdown with his fries."

Finally, several commenters wanted to discuss the use of electronics in planes, questioning whether it's necessary to restrict them.

"What a lot fuss about nothing," Aunti  said. "Are the airlines really relying on passengers to turn off electronic devices for safety? I seriously hope not. Are passengers really that dumb that they think their lives could be in danger if a couple of phones or laptops are on? Obviously, yes. Funny, international airlines never worry about such matters and none have fallen from the sky because of it."

sassybw replied that it was largely a concern of projectile objects: "If one flies up and breaks someone's nose, they would get sued."

But a lot of commenters begged to differ on the safety of cell phones while in flight.

AndresDavid: "I'm in the Air Force, and I can tell you that just one cell phone causes an annoying amount of interference, making it difficult to communicate with your co-pilot or the tower. Now, imagine a hundred passengers each with his or her own cell phone. It would make for a very unsafe takeoff/landing."

One commenter said that even a small risk of a plane crash isn't worth taking the chance and that Baldwin's wish to continue playing his game was unreasonable.

ghostridercb: "And when your plane crashes because it interfered with the equipment on a plane, feel free to not sue the airlines for the loss of your loved ones. The cost of an accident, should one occur, could be extremely high in terms of human life and the risk is completely avoidable in that no one absolutely needs to use their mobile phone in flight. The regulatory agencies and aviation industry take the position that any increased risk is unacceptable if it is avoidable.

"Lastly, GSM-based phones can cause a harmonic buzz, which would interfere with a pilot's radio communication. Additionally, while one or two phones might not be enough to impact the frequency's and computers on a plane, 200 to 300 on at once very well could.

"How freaking hard is it to turn off your phone. Baldwin should be booted from every flight where he disrupts the plane's course. If he doesn't like it, he can fly private."

What do you think about these issues? Share your opinion in the comments area below and in the latest stories on CNN.com. Or sound off on video via CNN iReport.