Editor's Note: Live coverage of Pearl Harbor remembrance events begin at 7:30 a.m ET and 12:30 p.m. ET. You can watch all of the events live on CNN.com here.

Survivors of the surprise Japanese attack on Pearl Harbor will remember the 2,400 people who lost their lives 70 years ago Wednesday.

Flying from aircraft carriers on Dec. 7, 1941, Japanese aviators attacked eight battleships, destroying two, and left a trail of death and destruction across the verdant landscape. They also struck other military installations on Oahu, Hawaii. The attack shook America's confidence and ushered the country into World War II.

For 70 years, survivors of the attack on Pearl Harbor have captivated listeners with their firsthand accounts, recalling buddies who died in their arms or the glasses worn by a low-flying Japanese pilot.

They have participated in solemn wreath-laying ceremonies and spoken to civic groups and school children about the infamous day and the need for the United States to remain vigilant. But the gradual loss of the World War II generation has accelerated, and this year, perhaps more than any before it, evidence of a tide change is inescapable.

So for them, today will be another chance to share their stories of what happened, in the hopes that their memories live on even after they don't.

Bob Kerr, 90, can still draw a detailed map of the Hawaiian island of Oahu from memory. He points out Pearl Harbor, the adjacent Hickam Field, and even the path the Japanese planes took over the island on December 7, 1941.

"ItŌĆÖs important for people to know that there was such a thing as an attack in 1941 on December the 7th," Kerr said. "ItŌĆÖs part of history. ItŌĆÖs one of the biggest events in our history. 9/11 may equal it, but it can't be forgotten."

George Bennett, national secretary of The Pearl Harbor Survivors Association's and a survivor, remembers that on the day of the attack he heard explosions, but thought it might be part of a U.S. military exercise or an accident.

Bennett, now 87, saw a Japanese plane flying low over barracks near the USS California. He and others worked to put out a fire on a hangar roof, but eventually were ordered to get down. 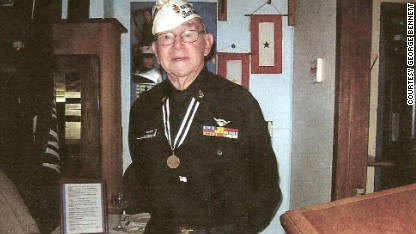 "Toward the end, the Japanese started to strafe us up there," Bennett told CNN.

Mary McCormick, 65, of Amarillo, Texas, told CNN her father, Lee Soucy, was supposed to have his enlistment expire December 7, 1941. Soucy, a pharmacist's mate on the USS Utah, would vividly recall a peaceful Sunday morning that quickly turned to terror, she said.

"He was looking out the port window and saw what he thought would be his last day there. He saw these planes coming in. He thought it must be the Marines because nobody else would be working on Sunday." 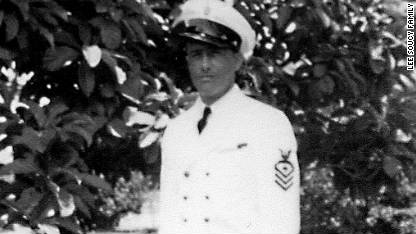 Lee Soucy swam 200 yards to shore from the sinking USS Utah. His remains were placed inside the vessel Tuesday.

The Utah was quickly disabled. Soucy swam 200 yards to shore from the sinking vessel and survived.

Kerr recalled how he, too, first reacted as the attack took place.

"At first people were saying the Navy is still playing with us. But why would they be shooting live ammunition? We had been on alert. We were bombing them with sacks of flour, they were bombing us with sacks of flour. DidnŌĆÖt anyone tell the Navy the alert was called off?ŌĆØ Kerr recalled. ŌĆ£Then someone said, ŌĆśThatŌĆÖs not a Navy plane. ItŌĆÖs a Japanese plane. ItŌĆÖs got a big red ball on the side of it.ŌĆÖŌĆØ 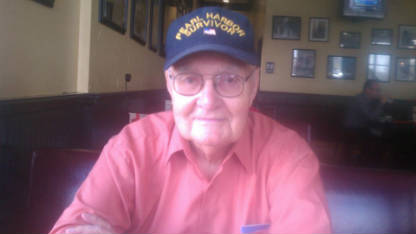 When Pearl Harbor was attacked in 1941, Bob Kerr, now 90, had the grim task of finding out which men in his squadron died.

When he finally walked out toward the porch of the barracks, Kerr saw a man in a cook's uniform lying on the ground. Rolling him over, Kerr realized the man was dead. It was the first time he had seen a dead body outside of a funeral parlor.

He realized things were going to be bad. He knew America was now at war.

So, as part of his job he went to get a roster of the men in his unit so he could keep track of who was injured or had died. He remembers that a┬Āfirst sergeant walked by and told him that was a good thing to do.

But he also remembers that was the last thing that first┬Āsergeant ever said.

"(Aircraft gunfire) got him just about then – killed him at the moment," Kerr said. "Right in front of my eyes while IŌĆÖm looking at him."

It is those vivid, yet painful memories that the survivors are hoping to share. They don't want what they witnessed to get lost or buried in textbooks students may never read.

For some veterans telling the stories of what happened that day still makes them cringe as they describe the graphic scenes that unfolded that day. And for some, the angst against the Japanese took a long time to get over. But for Bennett, that anger has faded. Now, in perspective, the important part is passing along the story of what he endured.

McCormick said her father had a similar view to Bennett. Before Soucy died, he had spoken at previous symposiums and met Japanese pilots.

"He forgave," McCormick said. "On his Pearl Harbor Survivors garrison cap he had a button that read 'love not war' written in Japanese."