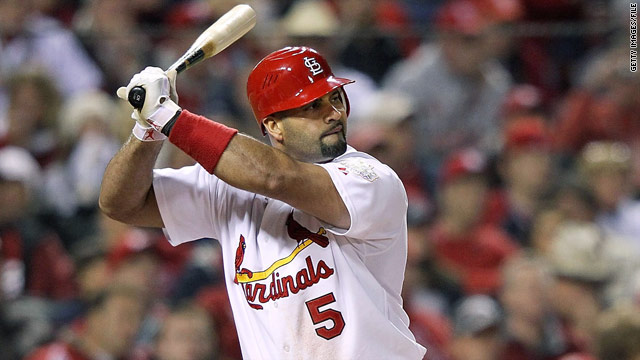 Free-agent slugger Albert Pujols will join the Los Angeles Angels on a 10-year contract worth at least $250 million, according to reports Thursday morning.

Both Yahoo! Sports and ESPN reported that Pujols, who has spent his entire 11-year career with the St. Louis Cardinals, had agreed to the deal. Both organizations cited anonymous sources in reporting the deal.

The 31-year-old first baseman hit .299 with 37 home runs and 99 RBI last season as the Cardinals won the World Series.

The deal would be the second or third richest in major league history, falling behind Alex Rodriguez's deals with the New York Yankees and possibly the Rodriguez's earlier deal with the Texas Rangers, according to the Yahoo! report.