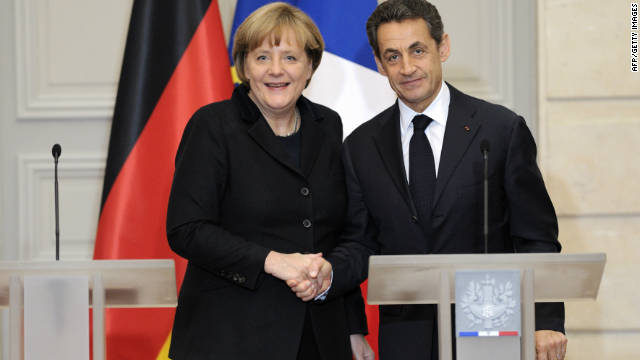 European Union leaders on Thursday begin a two-day summit in Belgium to determine how to save the euro, a roughly decade-old currency whose viability has been threatened because of EU members’ national debts.

Among the items of discussion will be proposals by the leaders of Germany and France, which want the European Union to have more influence over the budgets of the nations that use the euro. (Seventeen of the EU’s 27 countries use the common currency.) The French minister for European affairs, Jean Leonetti, warned Thursday that the euro could "explode" and Europe could "unravel" if a solution isn't found.

The following is a collection of information and links that will help you understand how the EU got to this point, and what EU members hope to do.

Events leading to this week's meeting

The national debts of euro members including Greece, Ireland and Portugal have pushed the euro to the brink of collapse, with a series of austerity measures and bailouts not yet convincing world markets that the single monetary system for 17 nations can survive.

Back in 2004 - two years after the euro debuted in note and coin form - Greece admitted it gave misleading financial information to gain admission to the eurozone, CNN's Peter Wilkinson and Irene Chapple report. Greece then revealed its 2009 budget deficit would be 12.7% of gross domestic product - well beyond the eurozone limit of 3%. Worried investors no longer would give Greece the money it needed to fund itself, and the country took a €110 billion bailout from its eurozone peers and the International Monetary Fund.

Lenders demanded steep budget cuts in return for the bailouts, but those measures led to mass protests that brought down governments in Greece and Ireland, and concerns about the countries' debts and deficits have continued. And fears are spreading to the larger economies of Italy and Spain, whose debts recently caused borrowing costs to hover around unsustainable levels.

This week, credit rating agency Standard & Poor's put the European Union, as well as 15 euro-using countries individually, on review for a possible downgrade. The two other euro-using nations, Cyprus and Greece, were unaffected because Cyprus already was under review, and Greece's rating already reflects a high risk of default.

Q&A on what credit agencies do

What leaders may do at EU summit in Brussels

Ahead of Thursday's summit in Brussels, French President Nicolas Sarkozy said failure to reach an agreement to save the euro is a "luxury we cannot afford," warning that the European Union would not get a second chance.

Leaders will discuss proposals to increase economic and political integration, including whether to make it easier for European Union regulators to challenge budget policies of member nations. One plan would sanction governments that fail to keep budget deficits under 3% of gross domestic product. Another, according to a leaked memo from European Commission President Herman Van Rompuy, would strip EU voting rights from some countries that have been bailed out but are still not meeting their deficit targets.

But the plans could require all 27 members of the European Union to agree to change fundamental EU treaties.

Nick Koundis, head of macro research at ABN AMRO, said Wednesday that without a breakthrough, "we'll be left with a complete and utter economic catastrophe," according to an article from CNNMoney's Hibah Yousuf.

"If the euro were to collapse, it would be disastrous for every country in the eurozone," Kounis said. He projected that a euro break-up would trigger a "super crisis" that would cost between 50% and 100% of the region's GDP over three years, along with sovereign defaults, bank failures, investor panic and uncertainty, a deep European recession, and overall wealth losses, Yousuf wrote.

Opinion: Breaking up the euro would be a foolish risk

George L. Perry, a senior fellow at the Brookings Institution and a former senior economist on the U.S. President's Council of Economic Advisers, wrote on CNNMoney.com that some EU nations could reject changes that dictate tax and spending priorities. He outlines a plan - allowing EU nations to borrow money, through bonds backed by the eurozone, up to 3% of GDP, and then letting those nations borrow any further money through national bonds in which the borrowing nation would assume all the risk - that he believes is more efficient and politically attractive.