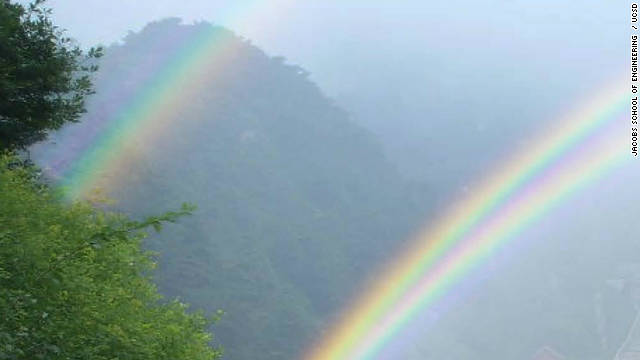 Good things abound in this world, and great comments put grins on our faces. In the spirit of the weekend that's coming, here are a few comments from today's news and feature stories that brought smiles to our faces:

A twinned rainbow happens when the primary bow splits in two. Scientists have found out more about how this rare event happens by using sophisticated computer science techniques. They say the effect would need regular raindrops as well as larger, hamburger-shaped droplets called "burgeroids." That little detail fueled our commenters' creativity.

RIcky Bobby: "If only those burgeroids were real burgers (i.e. cloudy with a chance of meatballs)! Now THAT would be something! Come on scientists, let's get to work."

2. When classmates let the secret out of the sleigh bag END_OF_DOCUMENT_TOKEN_TO_BE_REPLACED

The U.S. Supreme Court agreed Friday to consider an appeal from Texas officials over the state's controversial redistricting plan. The justices will hear the case on an expedited basis in early January. 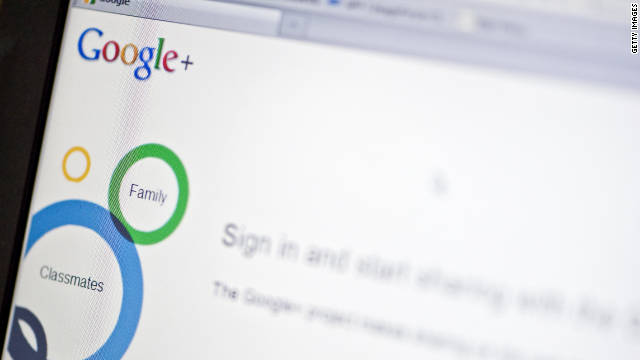 "This will be a hit with crazy exes."
–pmichner

Google has introduced a social facial recognition technology called Find My Face. The tagging suggestion tool works in the Google+ social network. Google says the feature includes privacy protection tools. But readers expressed concerns and imagined dystopian scenarios that could occur in the near future. Others wondered if we are marching toward a lifestyle out of science fiction.

The idea behind Find My Face reminded many readers of scenes they'd seen in popular culture, most notably in science fiction.

LFNJR: "True, but the V-queen was hot (scary hot, but still.) Who hasn't fallen for that scam. If they find a girl to sell cell phones, they find her clone to sell more."

END_OF_DOCUMENT_TOKEN_TO_BE_REPLACED 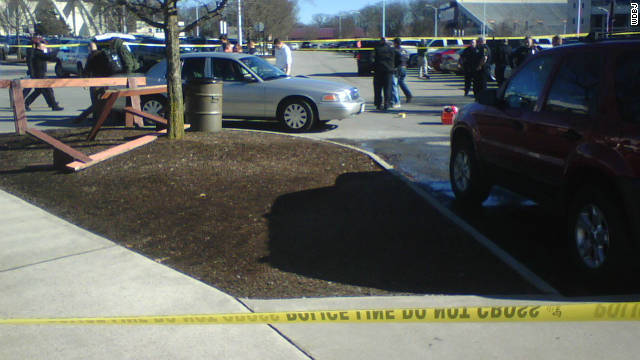 [Updated at 6:11 p.m. ET] Virginia State Police have identified Ross Truett Ashley, 22, as a man they say fatally shot a Virginia Tech police officer on Thursday before killing himself about 30 minutes later.

[Updated at 10:47 a.m. ET] The person that investigators believe fatally shot a Virginia Tech police officer on campus Thursday is not believed to have had any previous contact with the officer, Virginia State Police spokeswoman Corinne Geller told reporters Friday.

Virginia Tech Police Officer Deriek W. Crouse and another man were fatally shot with the same gun on campus Thursday, police said. Police say they believe the second man matched the description of the gunman that shot the officer.

Investigators are "very confident" they know the identity of the person they believe shot the officer, Virginia State Police spokeswoman Corinne Geller told reporters Friday. Authorities intend to reveal the person's identity after an official determination is made and the shooter's family is notified, Geller said.

The motive for Thursday's killing is still unknown, she said.

Hincker declined to provide any further detail on the identity of the alleged shooter, though Virginia State Police have scheduled a news conference for 10 a.m.

Both Virginia Tech Police Officer Deriek W. Crouse and another man were shot with the same gun.

Joshua Komisarjevsky was one of two men convicted of murder in the 2007 deaths of a woman and her two daughters.
December 9th, 2011
03:39 PM ET

A jury on Friday recommended that Joshua Komisarjevsky receive the death penalty for his role in a deadly Connecticut home invasion in 2007.

At a later date, a judge will weigh the jury's recommendation in sentencing Komisarjevsky, who was convicted in October on six felony charges.

Komisarjevsky's accomplice, Steven Hayes - the first defendant to stand trial in the case - was sentenced to death after a jury convicted him on 16 of 17 charges last year.

Prosecutors argued that Hayes and Komisarjevsky went into the Petit home, beat and tied up William Petit, raped and strangled his wife, molested one of their daughters and set the house on fire before attempting to flee.

The two daughters, who were both tied to their beds, died of smoke inhalation, while William Petit managed to escape from the basement, where he had been held. 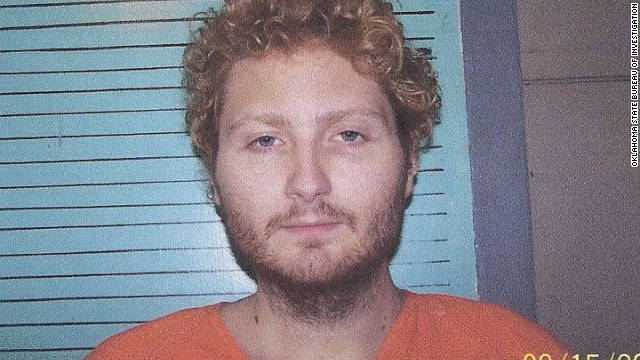 An undated photo from Oklahoma authorities shows Kevin Sweat, who has been charged with murder in two 2008 deaths.
December 9th, 2011
03:29 PM ET

A man in custody for a different case has been charged first-degree murder in connection with the 2008 shooting deaths of two Oklahoma girls, Okfuskee County authorities said in a news conference Friday afternoon.

Kevin Sweat, 25, had been charged with murder in the deaths of Skyla Jade Whitaker, 11 and Taylor Paschal-Placker, 13, who were found shot to death on a rural dirt road in Okfuskee County, Oklahoma, in June 2008.

Sweat was already behind bars in Seminole County (Oklahoma) Jail in his girlfriend's death when the new charges were filed, according to the state investigative bureau director. 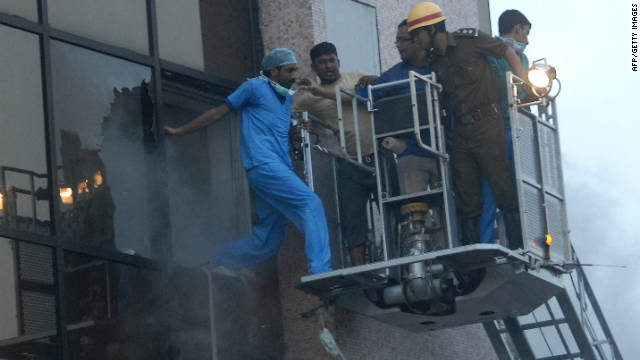 Video surfaces of American who vanished in Iran

Robert Levinson, a retired FBI agent who went missing in Iran nearly five years ago, appeared in a video that his family posted online Friday.

His wife, Christine Levinson, told CNN that the family received the video "a little more than a year ago."

In the video, Robert Levinson, a Florida man who disappeared in Iran in March 2007, said he was not in very good health and was running out of diabetes medication.

After the general rose from his seat to hand out certificates at a graduation ceremony for Afghan soldiers, five grenades hidden under his seat were detonated by remote control, Gen. Abdul Zahir Azimi, a spokesman for the Afghan Defense Ministry, said Friday.

Hameed was not hurt.

The attack happened Thursday at a training center for the Afghan National Army in Kandahar, Azimi said. It injured one soldier, he said.

The blast happened at an event that had attracted several American military trainers and other dignitaries.

The 2012 presidential election may be months away, but that doesn't mean CNN.com Live is resting on its laurels.Â  We are your home for all the latest news from the campaign trail.

END_OF_DOCUMENT_TOKEN_TO_BE_REPLACED

(CNN) - Federal prosecutors want baseball legend Barry Bonds to serve 15 months in prison for his obstruction of justice conviction, according to a sentencing memo filed in court Thursday.

Defense lawyers argued in their filing that the judge should accept the probation office's recommendation that Bonds be sentenced to two years probation, fined $4,000 and ordered to perform 250 hours of community service.

Bonds, 47, is set to be sentenced on December 16 in a San Francisco federal courtroom, less than two miles from the ballpark where he broke Hank Aaron's major league home run in August 2007.

Jurors who found Bonds guilty in April said he was "evasive" in his testimony to the federal grand jury investigating illegal steroids use by pro athletes.

(CNN) - A majority of European leaders agreed early Friday on a new deal to try to resolve the continent's debt crisis, but some countries including Britain refused to back a broader treaty change.

The 17 members of the eurozone, which share the embattled single currency, reached a deal for a new intergovernmental treaty to deepen the integration of national budgets. Six other EU nations supported the deal.

"We're doing everything we can to save the euro," President Nicolas Sarkozy of France said at a news conference in Brussels following a marathon summit meeting of EU leaders.

But the new plan, which leaders are aiming to have ready by March, did not get the backing of Britain and three other countries.

"We would rather have reformed the treaty with 27 members," Sarkozy said. But Prime Minister David Cameron of Britain demanded an "unacceptable" opt out clause related to the financial services sector, Sarkozy said.

The British waiver would have "undermined a lot of what we've done to regulate the financial sector," Sarkozy said. Instead, the eurozone countries, along with "anyone who wants to join us," are pushing ahead with the new intergovermental treaty, he said.

The national debts of euro members, including Ireland and Greece, have pushed the common currency to the brink of collapse, forcing international lenders to swoop in with bailouts.